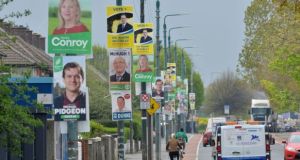 General Election candidates who fail to take down their posters before midnight tomorrow will face penalties including fines of €150 per poster under Irish littering laws.

The posters, along with their securing cable ties, must be removed seven days after polling day. The fines are imposed by local authorities, who will are charged with taking down posters which are deemed to be in breach of littering law.

Posters can be erected 30 days before polling day, or after an election is called – meaning that candidates have been permitted to poster their constituencies since January 14th.

Last year, Dublin City Council issues more than €30,000 in fines to election candidates who broke the rules on posters. The local authority said it issued more than 232 fines to those who postered too early, or left their posters up too long.

Several candidates, and indeed towns, around the country opted to go “poster-free” amid concerns about visual clutter and the environment. Ten-time general election candidate and former Lord Mayor of Dublin Christy Burke ran a poster-free campaign in Dublin Central, for example. It didn’t seem to harm his vote, as he recorded an impressive first preference vote of 1,502, and proved exceptionally transfer friendly, finishing just outside the seats on 5,168 votes.

Denis Naughten, the former Minister for Communications, Climate Action and Environment, also ran a poster-free campaign in Roscommon-Galway. He said the decision was a “clear statement of intent in relation to my determination to try and reduce the amount of plastic being generated rather than just soundbites.” He said the materials used for posters take several hundred years to decompose. He took the second seat in the constituency.

A survey undertaken by Claire Byrne Live/Amárach in 2018 found that 77 per cent of Irish people thought the use of posters should be banned, and several towns, led by Tidy Towns groups, have sought to enforce partial or complete bans in their areas. Candidates from smaller parties and independents have also argued that posters favour the larger parties with the budgets to print them, but also pay firms to erect and remove them. Defenders of postering say it sparks public engagement with election campaigning and drives familiarity with candidates voters will see on the ballot.