Can anything be done to stop farm deaths? 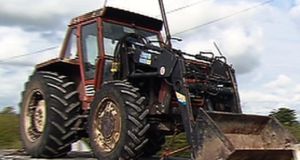 Last year was the worst year for farm deaths since 1991. Thirty people lost their lives in incidents which mainly involved machinery and animals

It’s the little things that stay with you when you watch the video testimonies about the impact of fatal farm accidents. The green knitted cap floating in water after six-year-old James Higgins went missing on the family farm in Shannonbridge, Co Offaly.

The recollection of Kieran Hogan that he had willed his son Dermot to get up after he had fallen through the roof of a shed. “It’s probably the only time I asked him to do something and he wasn’t able to do it.”

The bunches of daffodils Kevin Banville would bring his new wife, Diane. Last spring she held a month’s mind Mass for her husband on the weekend of their first anniversary. Their baby was christened the same weekend.

The videos are part of the What’s Left Behind series produced by Embrace Farm, a support organisation set up by Brian and Norma Rohan following Brian’s father’s death in a farm accident.

Yet last year was the worst year for farm deaths since 1991. Thirty people lost their lives in incidents which mainly involved machinery and animals. It started with the death of Conor Whelton (27), crushed by a trailer in January in Cork, and it ended on New Year’s Eve when Cork farmer Pat Buckley (40) was pinned against a barrier by a teleporter.

And the cycle began again this week with Johnny Ryan, father of Kilkenny hurling star Lester Ryan, becoming the first farmer in the State to die in a farm accident this year. He was also crushed by machinery.

So what is the answer if farm inspections and constant warnings do not work? Teagasc research has found that the number of farm deaths typically falls in the year following a particularly bad year for fatalities. Could it be because of the ensuing publicity or the fact that a death in the locality has made every farmer more safety conscious?

Perhaps the bravery of the relatives of James Higgins, Kevin Banville and Dermot Hogan in sharing their stories will hit home? It would be a fitting legacy for the boy and two fathers. lWatch the video testimonies on embracefarm.com