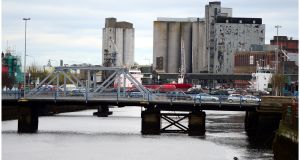 Campaigners concerned at the impact that a €140 million flood relief scheme could have on Cork city have called on the Office of Public Works (OPW) to extend the deadline for submissions. They held a protest at the weekend to highlight what they say will be a loss of access to the River Lee.

According to Sean Antoin O’Muiri of the Save Cork City group, they are calling on the OPW to extend the deadline for submissions on the OPW plan as they do ot believe that people are fully aware of the implications of the plan.

“We don’t fully know what the overall economic impact of the scheme will be - there needs to be a full evaluation of its impact in terms of trade and tourism and the disruption that a ten year project like this could have on businesses in the city centre,” said Mr O Muiri.

In a statement, the Save Cork City group said there had “been a lack of information and meaningful engagement around the development of the scheme” and “due to a minimal consultation process, hundreds of thousands of people in the Cork area may not be aware of the proposals.”

The group expressed concern the proposed flood relief measures will increase the flow and speed of the river, and cause higher water levels in the city, thus increasing rather than reducing the flood risk while it also noted the plan does not address what it said is the principal flood risk which is tidal.

Save Cork City also expressed concern at the OPW proposals over amenity loss, claiming they would result in loss of access to the river, both physical and visual” through the construction of concrete barriers to replace existing railings on several quays which currently allow people see the river.

Mr O Muiri declined to comment on a specific response from the OPW relating to the loss of access to the river in which the OPW said “that where a new wall is to be erected, it will be constructed in fair faced of textured finished concrete, “as happened near the Christy Ring Bridge.”

Among those taking part in Saturday’s protest was Workers Party Cllr Ted Tynan who voiced similar sentiments to Mr O Muiri in calling for an extension of the February 17th deadline for submissions and a full public debate on how exactly the OPW plan will impact on the city centre.

“Some people are saying to me that the rivers will become like culverts and we would remove the vista of the river and the river would become isolated from people walking along the quays but it seems to me that there’s a huge lack of awareness among people as to what the plans involve.

“I’ve looked at the plans and I’ve been briefed by City Hall and I still don’t fully understand what is being proposed - obviously the people who were flooded in 2009 are understandably looking for something to be done but I wonder are they going to be protected by this flood defence system ?

“What I will be seeking is to push back the February 17th deadline for three months, have plenty of publicity and public meetings to get people to look at the plan with experts from both sides and at the end of that process we would have a clear mind and either move forward or redesign it.”