Allowing abortion in rape cases ‘may lead to legal problems’ 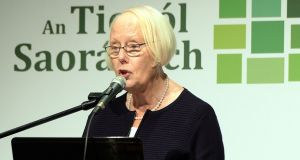 Chairwoman of the Citizen’s Assembly Ms Justice Mary Laffoy. The assembly heard from the Rape Crisis Centre on the provisions for women to help them deal with the trauma of rape. Photograph: Eric Luke

Allowing for abortion in the case of rape could lead to a number of significant legal problems, the Citizens’ Assembly was told.

Tom O’Malley, a senior lecturer in law at NUI Galway, said most rape cases take an average of 645 days to go to court so it would be “impossible” to allow for the criminal proceedings to take place first.

Alternative means would have to be sought for proving rape and that would raise questions as to whether the Garda should be involved and what proof would be required.

Important decisions would have to be made about who would do the investigation and the burden of proof needed, Mr O’Malley told the 99 members of the assembly who are deliberating the Eighth Amendment.

The assembly was told that approximately one woman in 20 who is raped will go on to become pregnant.

Dr Maeve Eogan, the medical director at the sexual assault treatment unit at the Rotunda Hospital, said some women get pregnant as a result of rape despite the availability of emergency contraception.

Women who attend the six sexual assault treatment units in Ireland are given three options. The first is to report the offence to the Garda and then have medical treatment.

The second is to have a health check and receive medical treatment without reporting the offence to gardaí.

The third is to receive treatment and to give forensic samples that can be kept up to a year while the victim decides whether to press charges.

Rape Crisis Centre chief executive Noeline Blackwell said the provision that allows women to bring a case up to a year after an incident is very important.

Only a quarter of all rapes are carried out by strangers and women often need the time to deal with the trauma of being raped by someone they know.

Dr Patricia Lohr from the Medical Director of the British Pregnancy Advisory Service said the “circle of trust” for Irish women attending British clinics is much smaller than for British women. She said Irish women often come alone.

The assembly was told women had the right to decide whether to continue with a pregnancy because it is she who assumes the burden of pregnancy and childbirth.

Arguing from the pro-choice perspective, Dr Joan McCarthy from University College Cork said respect for the reproductive autonomy of women means respect for the choices they make.

“Respect for their reproductive autonomy means respecting the choices that women or girls make in light of their values and goals and their views of the health and life risks that they feel able or willing to take,” she said.

From the anti-abortion perspective, Dr Dónal O’Mathúna, a lecturer in DCU, said the right to choose includes the responsibility to choose the right thing. “We don’t have the right (or the ability) to do what we want.”

The next session of the assembly in March will hear personal testimonies from women affected by the Eighth Amendment. It will also hear from six different organisations on the issue, three each from the pro-choice and anti-abortion perspectives.

The members of the assembly have been asked by the chair Ms Justice Mary Laffoy as to which organisations they would like to hear from. She will make her decision in advance of the next weekend in March.