Camaraderie and ‘wartime spirit’ soars as the snow comes down

‘I’m 41, and I can safely say this is the first time I have ever built a snowman’ 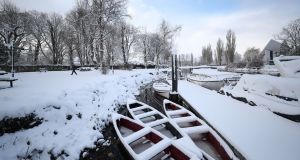 While bread lines appeared at stores all over the country as people queued for sliced pans, there were mountains of sandwiches available in Ballydehob, Co Cork.

Budd’s restaurant on Main Street kept its door open for the duration of Storm Emma, with owner Jamie Budd a little mystified about the weather “hysteria”.

“Apart from anything else, we chose to stay open to provide a service to our community, and I am glad we did...We’ve had this great sense of camaraderie, almost like a wartime spirit.”

While getting some supplies proved tricky, freshly-cut sandwiches were available despite the nationwide bread shortage.

“Ah, it wasn’t a problem for us, we bake our own. But that whole bread thing was a bit mad, wasn’t it? I think we know now that if there is ever a nuclear apocalypse what we will all need to stock up on first.”

Laurence Howard has self-catering accommodation and a farm at the the Belmullet Coast Guard Station on Claggan Island off the Mayo coast, and he traded through the snow by accident.

Stuck in the snow

“We had guests who booked in for one night on Thursday. Despite the weather warnings, both they and we decided to stick with it thinking it would be grand,” he said.

Howard’s guests were due to check out on Friday morning, and travel to Dublin to return a rental car. They made it about a kilometre. “They were stuck in the snow. I had to get the tractor out and bring them back.”

The farm work has been tougher going. “We have 26 cows with calves, and we had to have a quick rethink this morning, and we had to put them all back in the shed. It would not have been been fair to leave them out in this weather.”

As he talked his children were putting the finishing touches to a snowman the family had built nearby. “I’m 41, and I can safely say this is the first time I have ever built a snowman, so I suppose that’s a good thing.”

The City Pharmacy on Dublin’s Dame Street has been open every day since the snow started falling. Pharmacy manager Phillipa Galligan said they have a substantial number of customers who need daily dispensations such as methadone.

“We also want to serve the wider community as people would have been in dire straits had they not been able to access essential medications.”

Niall Kavanagh, who owns Cowtown cafe in Dublin’s Stoneybatter, had no option but to close on Friday because travelling had become too dangerous for staff.