Call for referendum on expansion of Cork city boundary 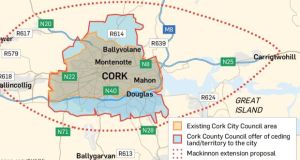 A graphic showing the proposals for the expansion of Cork city. Irish Times graphics

The Government should hold a referendum in Cork to allow people living in the county decide whether they want to become part of the city under local government reform proposals , according to the author of a previous report which argued for a merger of both the city and county councils.

Alf Smiddy, who chaired a 2015 group examining local government reform in Cork which published a majority report arguing for a merger of Cork City Council and Cork County Council, has been highly critical of a subsequent report recommending an extension of the city boundary.

Mr Smiddy said the more recent review chaired by former chief planner for Scotland Jim Mackinnon was “a rambling, cobbled-together report, born out of political expediency” and he called for a referendum on the issue.

“Full engagement with our citizens is an absolute priority now before vested interests force a solution on our people that will polarise us, our children and grandchildren in Cork forever and a day,” said Mr Smiddy in a statement to The Irish Times.

“It is of paramount importance that all of our citizens in the city, and in each suburb, town and village throughout the county are properly engaged, and ultimately I feel it would be just fantastic if a plebiscite or referendum would be called in mid-2018 to put democracy in action in Cork.”

Mr Smiddy’s call for a referendum comes as opposition to the Mackinnon report appears to be growing in the county, in particular in a number of towns which have been earmarked for inclusion within the city such as Ballincollig and Blarney in Mid-Cork and Carrigtwohill in East Cork.

Ballincollig-based Fine Gael councillor Derry Canty said opposition is growing among Ballincollig’s 18,000 citizens agains the recommendation, with people signing a petition against such a proposal.

“The people of Ballincollig are totally against being absorbed into the city - we’ve been in the county since the foundation of the State. We’ve grown our town and formed all our own community associations -we are not part of the city and we don’t want to become a suburb of the city,” he said.

“I’m a city lad, I moved out there 40 odd years ago, like a lot of people from the city did but my kids were born there and I threw my heart and soul into Ballincollig as did the others who moved there and we are part and parcel of the town now and we are county and that’s the way we want to stay.”

Cllr Canty’s argument for remaining part of the county was echoed by party colleague, Cllr Anthony Barry from Carrigtwohill in East Cork, who said he has yet to encounter anyone among the area’s 7,000 population who wants to become part of Cork city.

“People are absolutely appalled by Mackinnon because what it’s doing is dividing Carrigtwohill in half - it’s taking the urbanised industrialised half and putting it in the city and pretty much ignoring the rest of Carrigtwohill -all of the parish, south of the motorway down to water, is excluded,” he said.

“We had a public meeting and not one person was in favour of Carrigtwohill going into the city and this argument because people are working in the city, we should be part of the city, just doesn’t stack up - Mackinnon doesn’t understand how the community here in Carrigtwohill works.”