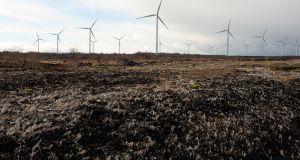 The project is designed to protect an estimated 100m tonnes of carbon stored in the bogs as well as a further 3.2m tonnes of carbon which the bogs will naturally abstract from the environment between now and 2050. Photograph: Dara Mac Dónaill

The Cabinet has approved €108m in funding for the rehabilitation of Bord na Móna bogs under plans to improve Ireland’s record on climate action.

The money will be spend alongside a “Just Transition Fund” which will see a total of 47 projects share almost €28 million for employment and community supports for communities that were traditionally economically dependent on peat harvesting.

The €108m for Bord na Móna’s large-scale peatlands restoration project is designed to protect an estimated 100m tonnes of carbon stored in the bogs as well as a further 3.2m tonnes of carbon which the bogs will naturally abstract from the environment between now and 2050.

The project will also enhancing biodiversity.

It is intended some 350 jobs involved in the restoration project will support communities and contribute to Ireland’s target of being carbon-neutral by 2050. The Government funding, which will come from the Climate Action Fund, is to be bolstered by an €18m investment from Bord na Móna itself, which is transitioning to a renewable energy provider.

The separate, Just Transition funding of almost €28 million will be spent on a range of initiatives in communities which were economically dependent on peat harvesting .

Some 47 projects spread across the midlands will share the grants which range from €70,000 for a Carbon Challenge Feasibility Study in Edenderry Co Offaly, to projects costing more then €1m each such as a Bord na Mona Employee Supports - Training and Upskilling Project and a Digital Learning Hub based in Longford.

The announcement of funding has been welcomed by Just Transition Commissioner Kieron Mulvey who last month said there was an urgent need to change State aid rules to better support local authorities, businesses and communities in the midlands which were moving away from reliance on peat production.

Mr Mulvey said the projects were “innovative” and would bring new, green energy enterprises with the potential to boost the economy of the region and create jobs.

The offers of funding which are provisional have been welcomed by Minister for Environment Eamon Ryan, who visited Lough Boora bog in Co Offaly, on Tuesday.

Mr Ryan said “bog rehabilitation and remediation is a wonderful example of Just Transition in action, where workers who previously harvested peat for power generation will now be the custodians of our bogs”.

The said the project would “turn carbon sources into sinks, restore biodiversity and help us meet our climate goals”.