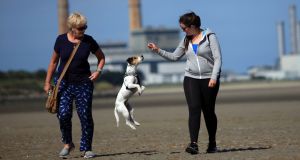 Judy and Kim Doran, from Crumlin, with Nugget, a rescue dog from the DSPCA, enjoy the warm weather on Sandymount Strand. Photograph: Garrett White

Dublin Zoo is preparing showers to keep its herd of elephants cool, while bakers have increased the production of burger buns as the country prepares for some of the best weather of the year.

Regular showers are a must for the zoo’s elephants, while staff have frozen fruit and vegetables into ice cubes and intend to give these to their charges to keep them hydrated.

Meanwhile, Dermot Doherty of the Irish Bakers Association says bakers are well prepared: “Barbecues are such a traditional part of the Irish summer that there is always an increase in burger bun sales at this time of the year, regardless of the weather.

“However, the sustained period of great weather has meant that demand is significantly higher than usual,” he said, as weather forecasters predict that temperatures could hit 30 degrees over the coming days.

In Kerry, the Dingle-based ice-cream maker Murphys expects sales to rise by a fifth in the days ahead, even though most of the public believe that sales double, or triple during Ireland’s occasional exposure to the sun.

“Ireland is a hot ice-cream spot, anyway,” said co-owner Sean Murphy, citing a global survey that put the Irish at 8 litres per head, far ahead of the Italians and the British and lagging behind only New Zealand and the US.

Raspberry sorbets are cool at the moment, he said, though Dingle gin and Irish coffee have their supporters, too. Demand for winter favourites like chocolate sorbet will be down, but that does not mean they will stop making it.

“People get very angry if you run out of their favourite flavour so the list has to be kept up. Ice-cream puts people in a great mood,” he said, adding that no one knows why ice-cream makes people feel good. But it does.

Dark side of the sun

Sadly, every life has its shade. People should “use plenty of sunscreen and hydration, particularly the young and elderly”, the Irish Nurses and Midwives Organisation cautioned.

Urging proper sunscreen, Kevin O’Hagan of the Irish Cancer Society said: “It is especially important to protect babies and children, as much of the UV damage that leads to skin cancer takes place in the early years of life.”

Following a series of drownings recently, Minister for Rural and Community Development Michael Ring urged swimmers and bathers to take precautions, and swim only where there are lifeguards or ring-buoys.

Children should be supervised, while adults should drink sensibly. Ten people died in the last good spell of weather in May, he warned. “The unfortunate reality is that drownings increase greatly during warm weather.”

Dublin Fire Brigade warned about the danger of fires during the warm weather after two fire engines from Tallaght and Dolphin’s Barn had to attend a fire at a field near Liffey Valley in Dublin on Friday night.

“With our friends in @WeatherRTE predicting sunny weather, we’re expecting more of these fires. Discarded cigarettes can easily cause a fire like this, be aware if you’re out and about,” the fire brigade said.

Meanwhile, the Irish Farmers Association (IFA) wants Minister for Agriculture Michael Creed to allow farmers in the Glas environment scheme to be able to cut their meadows now, rather than having to wait until July 1st.