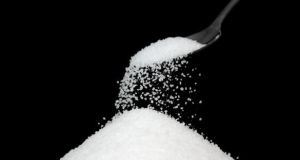 The director of the Irish Beverage Council, Kevin McPartlan, said the Minister for Finance is labouring ‘under the delusion that additional taxes on soft drinks will have any positive impact on obesity’. Photograph: Getty Images

Minister for Finance Michael Noonan has announced he intends to proceed with his plan to introduce a tax on sugary drinks, but not until April 2018.

Mr Noonan said he wanted to delay the introduction of the measure to bring it into line with a similar tax planned for the UK and said a consultation period would be opened to run until early in the new year.

Speaking after delivering his speech, Mr Noonan said he had decided to delay introducing the tax after the Brexit vote. “The supply lines are very connected between the UK and Ireland and very connected into Northern Ireland. The final straw was once Brexit came, I said we need to align the two taxes. I don’t want boot-loads of soft drinks coming down from Newry,” he said.

“The decision to postpone the introduction of a sugar-sweetened drinks levy until April 2018, despite it being a cornerstone measure of the new national obesity strategy, suggests there is still no genuine cross-Government commitment to tackling obesity,” said the Irish Heart Foundation’s head of advocacy, Chris Macey.

He said the more than 54,000 obese school-aged children in Ireland, along with every other child in this country, “have been badly let down in this budget”.

The Irish Beverage Council, which opposes a sugar tax, accused Mr Noonan of “continuing to labour under the delusion that additional taxes on soft drinks will have any positive impact on obesity”.

The council’s director Kevin McPartlan said there was international evidence of “a 100 per cent failure rate of sugar tax” and argued the tax would “hit consumers, industry and the economy for no public health benefit”.

The Food and Drink Industry Ireland (FDII), the Ibec group that represents the food and drink sector, also sharply criticised the proposed tax.

“Evidence-based policy has collapsed in the face of populist and ineffective public health measures,” its spokesman Paul Kelly said.

“This will cost the Irish consumer dearly with no evident benefits and it is the thin end of the wedge for further damaging discriminatory taxes on the Irish food and drink sector.”