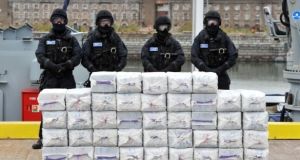 Members of the Navy with the cocaine haul seized on the yacht Makayabella, in Haulbowline Naval base, Cork in 2014. File photograph: Michael Mac Sweeney/Provision

A British man caught skippering a yacht off the Irish coast with almost €300 million worth of cocaine on board has died in prison while serving a ten year sentence for his part in the operation.

Jonathan Powell (73) died at Wandsworth Prison in England having been transferred back to the UK after his conviction in Ireland for his part in smuggling drugs into the UK aboard the yacht, Makayabella.

Powell from Silsden, West Yorkshire was given a ten-year term by Judge Sean Ó Donnabháin when he pleaded guilty at Cork Circuit Criminal Court to possessing 41 bales of cocaine for sale or supply.

Two other men detained by the Irish Naval Service with Powell aboard the Makayabella, Benjamin Mellor (36) from Bradford and Thomas Britteon (30) from Grimsby were each jailed for eight years.

The yacht, which was carrying around a tonne of cocaine with an estimated street value of €290 million, was boarded by Naval Service personnel 300 km off the Cork coast on September 23rd, 2014.

The detention was part of a joint operation involving the Naval Service, customs officers and gardaí with support from Britain’s National Crime Agency which later arrested five others in the UK.

The operation to track the yacht across the Atlantic from the Caribbean involved the Irish authorities, along with both the National Crime Agency and National Maritime Information Centre in the UK.

Insp Fergal Foley told Judge Ó Donnabháin at Powell’s trial in April 2015 that the English man and his two crewmates were in a poor state when a boarding party from the LÉ Niamh went aboard the yacht.

“To be blunt, they were delighted to see the Navy,” said Insp Foley, adding that all three had been without food for several days and Mellor was so hungry he had started eating some of the cocaine.

Insp Foley told the hearing that Powell’s son, Stephen, who had been jailed some months earlier in the UK for 16 years for his part in the plot, was the brains behind the drug smuggling plot.

He had given his father the money to purchase the yacht to bring the drugs across the Atlantic before they were to be transferred to a motor cruiser, the Sea Breeze, off the Welsh coast and landed in Wales.

But the plan went awry when the Sea Breeze ran out of petrol en route to Kilmore Quay in Wexford on September 14th, 2014 and ended up having to be towed into Rosslare Harbour by the local RNLI.

Customs officers became suspicious about the three Englishmen on board when they found a large quantity of diesel, a suitcase of food and a satnav phone on board the 7.6m cruiser.

The phone had been used to make calls to a vessel 600km off the Irish coast and a French patrol aircraft confirmed a yacht at that location and a Joint Task Force operation was begun.

In addition to Powell and the two other men jailed in Cork, some five others, including Powell’s son, were jailed in the UK for charges arising out of the probe into the drugs smuggling operation.

David Webster (46) and Philip McElhone (31) were both jailed for 11 years and James Hill (33) was jailed for six years for conspiracy to import cocaine into the UK aboard the Makayabella.

Stephen Powell’s wife Dawne Powell (58) was acquitted of conspiracy to import cocaine but convicted of money laundering following a trial and she was sentenced to three years in prison.

The Leeds trial heard that Stephen Powell also bought the £100,000 (€137,000) Makayabella in his name but the yacht was paid for in four instalments from a bank account in the sole name of his wife.

The second boat, the Sea Breeze, was bought by Stephen Powell but the cash payment of £18,350 was made by his wife who had kept control of the money for her “habitual gambler” husband.