Brian Crowley to address his political plans for the future 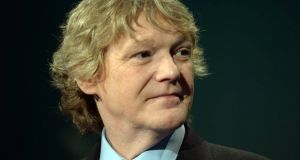 Fianna Fáil MEP Brian Crowley will address issues about his health and future political plans at a press conference on Thursday.

It comes amid speculation that he may be considering standing for re-election in this year’s European elections.

Mr Crowley (54) topped the poll in the 2014 European elections for Ireland South when he won 180,329 first preferences to take the first seat on the first count. He has missed the entirety of the current European Parliament session due to ill health.

Last September, a spokesman for Mr Crowley declined to address the issue of his absence from the European Parliament, telling The Irish Times that Mr Crowley would be making no comment “until he’s finished with the doctors”.

It is understood Mr Crowley, who spent much of the last four years in and out of hospital in Cork, now feels ready to address issues about his health, absence from the European Parliament and his political future.

Shortly after his re-election in 2014, Mr Crowley announced he was leaving the liberal ALDE (Alliance of Liberals and Democrats for Europe), of which Fianna Fáil is a member, and moving to ECR (European Conservatives and Reformists Group), a Eurosceptic group set up by British Conservatives in 2009.

It is understood the move annoyed Fianna Fáil leader Micheál Martin but he refrained from moving against Mr Crowley despite being urged to do so by Mr Crowley’s substitute on the Fianna Fáil ticket, Kieran Hartley of Waterford.

Speaking to The Irish Times last year, Mr Hartley was severely critical of Mr Crowley, saying he was “not interested in representing the people of Ireland South – it’s all about Brian Crowley”. He argued that voters in Ireland South were disenfranchised by Mr Crowley’s non-attendance in Europe.

Following the announcement of a briefing, speculation began to focus on whether the Bandon native might consider a solo run as an independent. He topped the poll in Munster and Ireland South in 1994, 1999, 2004 and 2009 as well as 2014.

Senior Fianna Fáil sources last year told The Irish Times there was no way Mr Crowley would run again for the party in Europe. But local observers in Cork on Monday night said he had a proven track record as a vote getter across Munster and the Ireland South constituency.

“If he does decide to run, much will depend on how successful he is explaining his non-attendance in the European Parliament to voters and whether he can convince them that his health has improved and he is now up to resuming his role as an MEP,” said one source.

“If he runs as an independent, he will be competing with Fianna Fáil for votes because the party will be running its own candidate but since the UK’s withdrawal from the EU means there are more seats available, Ireland South gains an extra seat so it becomes a more manageable challenge.

“Some might say Ireland has changed a lot since he last ran, with the electorate voting for gay marriage and abortion. But Brian has always been a conservative so he might well see himself tapping into that conservative constituency that believes they are no longer represented by the mainstream parties.”