Traditional Maori blessing for opening of NZ office in Dublin 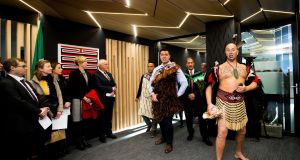 A traditional Maori blessing was held to mark the opening of the New Zealand embassy in Dublin. Photograph: Tom Honan/The Irish Times. 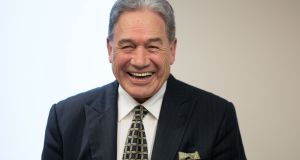 New Zealand opened its first ever embassy in Ireland with a traditional Maori blessing and a visit by the country’s deputy prime minister on Monday.

The embassy, on Merrion Row in Dublin city centre, will help cement existing ties with the Pacific and benefit future trade relationships between Ireland and New Zealand, officials said.

The new ambassador, Brad Burgess, was joined by government officials and deputy prime minister and minister of foreign affairs Winston Peters for the ceremony. Mr Peters said the opening of the embassy was triggered by Britain’s vote to leave the European Union two years ago.

“The moment the Brexit decision happened on the 23rd of June 2016, it became very clear that we would have to, with respect to Ireland, set up an embassy here.”

It was “one of the first decisions we made that we could no longer think of servicing out of London, which was what had been going on in the past. That’s why we made the decision”, Mr Peters said.

“Of course, as you know, Brexit is a slow process to be over by March of next year, so in a way we’re getting ready early. It’ll have a lot of ramifications.”

“Ireland is stretching its reach off shore. It has always been a country that has seriously understood the importance of domestic, plus diplomatic relations,” he added.

“We can be of assistance to the Irish in the Pacific and elsewhere and we know the Irish can be of big help to us where the European Union is concerned. So if we both put our best foot forward, we can deepen our relationship and mutually get more out of it for both of our populations.”

Mr Peters said about one in six people in New Zealand had Irish heritage.

“So we are far more familiar with Irish culture than you might think…We have been big fans of the Irish for a long time and we have a similar sense of humour and a similar sense of justified defiance so to speak, so we should get on just fine.”

The Maori blessing, held before staff officially occupy any government building, featured prayers and hymns sung in the Maori language by the culture group Ngati Ranana.

The ceremony was led by Martin Wikaira, head of the government’s Maori policy unit, who said he would spend time this week visiting the birthplace of his ancestors in Co Down before returning to New Zealand.