Brexit explainer: What is the backstop and why does it matter? 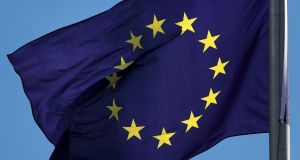 Neither party to the Brexit negotiations wants to see the return of a hard border but they cannot agree a plan on how to achieve this. File photograph: PA Wire

Why is the Irish Border such a big deal with Brexit?
The 499-kilometre border running from Carlingford Lough to Lough Foyle will become the only land border between the UK and the European Union after Brexit.

The 1998 Belfast Agreement brought peace to Northern Ireland and removed the need for border checks.

It also established north-south rules and institutions that helped solidify the Peace Process. The border is currently invisible and neither side wants the return of infrastructure along the border or the creation of a hard border.

So what exactly is a hard border?
It is a frontier monitored and protected by customs officials and border inspectors, and potentially police or military personnel if there are security issues around the border.

The general fear is that the return of customs officials or border inspectors would be so unacceptable to people who travel freely across an open border that it would lead to anger and, potentially, violence.

That could in turn lead to a police or military presence along the Border to protect check points. Customs and security posts along the Border were regular targets of republican paramilitaries during the 30-year Troubles.

Why would there be a need for border checks?
Different customs rules, regulations and standards will apply in Northern Ireland and the Republic if the UK is leaving the EU so the different rules could have to be enforced at a border.

What do the EU and UK want along the Border?
Neither party to the Brexit negotiations wants to see the return of a hard border but they cannot agree a plan on how to achieve this.

So have they come up with anything to solve this problem?
The EU and UK agreed in a political deal in December 2017 that a “backstop” was required in the withdrawal agreement – the divorce deal – that would guarantee an invisible border in the event of no other solution to achieve this being found in a Brexit deal, either in a specific solution for Northern Ireland or in a broader EU-UK trade deal.

The December 2017 agreement also aims to protect North-South co-operation, support the all-island economy and safeguards the 1998 Belfast Agreement. In March 2018 the two sides agreed that there had to be a legal text – not just a political declaration – around how this option would work in practice should no better option be found.

What exactly is the backstop?
It is an insurance policy written into the withdrawal agreement, or Brexit treaty, guaranteeing no harder border on the island of Ireland and no need for border infrastructure.

It would only be used as a last resort or the default option if the EU and UK could not reach an overarching free trade deal that would make trade so frictionless that there would be no border between the EU and the UK, including on the frontier between Northern Ireland and the Republic.

What backstop did the EU originally propose?
Brussels believes a hard border can be avoided and the Belfast Agreement upheld if Northern Ireland remains fully aligned with the EU’s customs union and parts of the single market after Brexit.

This would mean matching the rules north and south of the Border for customs, energy, environmental regulations and laws covering agriculture and fisheries.

Northern Ireland would stick to EU rules covering state aid and would fall under the jurisdiction of the European Court of Justice in applying those rules. The EU’s chief negotiator Michel Barnier initially nsisted that this backstop can only apply to Northern Ireland. However this was to change a bit as the negotiations progressed

Did the UK like the EU’s proposed backstop?
No. British prime minister Theresa May has said that no UK leader could agree to different rules applying to different parts of the UK that would separate Northern Ireland constitutionally and economically from the rest of the UK.

London arguee that if the backstop only applied to Northern Ireland, it would effectively create a customs and regulatory border in the Irish Sea. The DUP also opposed the original backstop plan and has continued to object as the backstop plan evolved.

If there is no backstop . . . there would be a disorderly Brexit and the UK would crash out of the EU in March 2019

DUP leader Arlene Foster has warned that its “red line” that there could be no Brexit deal that would divide Northern Ireland from the rest of the United Kingdom was “blood red”.

How did the backstop plan develop?
The UK government suggested a backstop that would keep the whole of the UK aligned with EU customs union rules for a limited time after the post-Brexit transition period – a standstill period when current EU economic rules continue to apply over the UK – expires at the end of 2020.

This was largely accepted by the EU in the final run-up to the signing of the withdrawal agreement. The draft withdrawal agreement says that, under the backstop plan, the UK as a whole would remain in a basic customs union with the EU. The North would remain in a full customs union with the EU and would also apply whatever rules and regulations of the EU single market needed to avoid a hard border in Ireland.

But there are still problems?

Yes. Hardline Brexiteers in May’s government are hostile to any backstop that could keep the UK or Northern Ireland subject to EU rules indefinitely and want the backstop to have an expiry date or release clause. The DUP also objects to the revised plan, arguing that it would still separate the North from the rest of the UK.

The hard Brexit lobby has also pushed for a time limit on the backstop. However Brussels and Dublin officials argue that this would not be a backstop; it could not be an insurance policy if there was a way of backing out of it. It can be temporary “unless and until” a better solution is agreed but it cannot be time-limited or expire, they say.

So where are we at now?
EU and UK officials agreed the draft text of a Brexit agreement that addresses the Irish Border question. It still requires sign-off at a political level by the EU but, more crucially, by the UK government and this is a central point in the debate in the House of Commons.

The backstop chosen in the draft will be in the form of a temporary UK-wide customs arrangement with more specific and deeper measures for Northern Ireland that will make more closely aligned with customs and the rules of the EU single market than for the rest of the UK. This, the officials believe, will avoid the need for a hard border if the matter is not addressed in a future EU-UK trade deal. A review mechanism  will involve a joint EU-UK committee judging when all-UK customs union can be terminated.

But will it be agreed at a political level in London?
That is the big question. The DUP has said they will vote against the Withdrawal Agreement deal because of the backstop and so have many in the hard Brexit lobby. They worry that the UK could remain "stuck" in a customs union with the EU.

And what happens if there is agreement on the backstop as set out in this draft?
If there is no backstop, there will be no divorce deal and no transition period. In other words, there would be a disorderly Brexit and the UK would crash out of the EU in March 2019. It is anyone’s guess how goods passing over the Irish Border would be treated in such a scenario but the UK’s chaotic departure from the EU could create all sorts of difficulties for cross-border trade and beyond. Article 50 could also be delayed to try to give more time to work it out, delaying the UK's departure date.

Can it be tweaked?

The EU has tried to provide some reassurance to the UK. They have said that they do not want to have to use the backstop. Both sides say they want to negotiate a trade deal to avoid the backstop being triggered. The backstop would commence under the withdrawal agreement after the end of a standstill transition period, due to run until at least December 2020 and possibly December 2022. However, whether the withdrawal agreement can now be finalised is very much in question.