Brexit nears the Dover cliff-face: ‘MPs should be burned at the stake’

January 7th, 2019: Britain's government sent a convoy of 87 trucks on a test-run from a little-used airport to the country's main trading gateway to continental Europe on January 7, a rehearsal for the upheaval of a no-deal Brexit that was mocked as a waste of money. 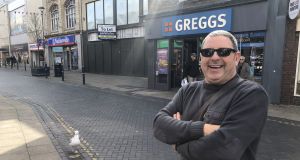 ‘The idle French and the Germans take [immigrants] and put them on a row boat and say, “Off you go to England”,’ says Stephen, a Brexiteer, in Dover. Photograph: Patrick Freyne

Doug Cockle at the RAF Manston History Museum points out the window to the disused Manston Airport, which is being transformed into a park for up to 6,500 trucks. This is part of Operation Brock, a no-deal Brexit traffic management plan for Kent.

If you drive alongside the airport’s fence you can see diggers and, every hundred yards or so, portacabins. “They had a practice run last month. But it was a joke. There were less than 100 lorries.”

As a museum spokesman, he says, he can’t give me any views on Brexit, but he’s happy to tell me a joke: “What’s the difference between the mafia and the EU?”

The punchline? “There’s no difference.”

His fellow volunteers are more forthcoming about their views. “As far as I’m concerned the MPs should be taken out and burned at the stake,” says one man.

A third volunteer, John White, thinks the Brexit process has been difficult only because “MPs aren’t used to making real decisions. The EU has been making the decisions for them.”

He takes out a newspaper clipping from his pocket that, he says, encapsulates his views. It’s an opinion column from the Daily Telegraph headlined “Decisions affecting the lives of voters are taken by bureaucrats and unelected experts”.

Does he know anyone who voted to remain? His son did, he says. “A lot of people voted remain because they’re worried about their jobs. But I’m an old man. Those things don’t matter to me.”

Is he worried about Kent being turned into a truck park? He laughs. “I don’t go into work any more, so I can lie in bed and look out at it.”

Across the road at the Spitfire Memorial Museum, Jeremy Impett and Andrew Howell are a bit more disturbed at the thought of traffic chaos, but both of them voted to leave the EU. Why? “Immigration,” says Howell, “and how it’s driven down wages. I’m on a third of what I earned years ago.”

“I’ve had periods of unemployment where I couldn’t find low-wage work,” says Impett.

And the incursion of trucks isn’t too high a price? “No,” says Howell. “If the price of my house dropped underground and my wages got cut, I’d still choose to leave.” The EU, he says, “is a dictatorship”.

Some 62.2 per cent of people in the constituency of nearby Dover and Deal voted to leave the EU. Appropriately, there’s a Banksy mural near the ferry terminal in Dover town depicting a man on a ladder chiselling off one of the 12 stars on an EU flag.

Over the course of a day in Dover, I meet only one remain supporter, Tunisian supermarket cashier Tariq Trad, and he couldn’t even vote in the referendum. He’s married to an English woman and has been in Dover five years. He thinks everyone is going to end up poorer if they leave.

“People talk about it all the time, and the reason they all give is immigration,” he says. “That’s not a good reason. If there were five or six reasons that would be something – but just one? You could make it harder for people to come here without leaving the EU.”

Immigration is not an issue for all Leave voters. “Some of the Poles are better workers than the English,” says Gary Robb. “I don’t care about immigration.”

Robb is a long-time Labour supporter who, as a child, was on marches in support of the miners’ strikes. He once worked making surgical instruments, but now, he says, the UK doesn’t make things and it certainly doesn’t look after people. He was homeless for a while. His girlfriend, Carlie Jeffs, is deaf and uses a wheelchair. She tells me about disabled friends who aren’t getting the help they need. Brexit, says Robb, is their “stand”.

Do they worry about what might happen if the UK leaves without a deal? “I think that’s a bit like the millennium bug,” says Robb. “It’s not going to be as much trouble as they say.”

In their respective universities, leavers are in a minority. “At lunch, people sit around grumbling about Brexit and I sit there [thinking], ‘That was me’,” says Kjellberg-Motton.

How do they feel it’s going? “We’re a bit uneasy,” says Kjellberg-Motton, “because it seems more and more likely they’ll push for a second referendum or revoke article 50.”

They’d prefer leaving the EU with no deal to not leaving at all. They recognise that this might be “a bit chaotic” but they also believe it can be made to work.

Today, in Kent, Highways England began trialling another element of Operation Brock. This is a contraflow system in which two lanes of the M20 are shut in preparation for a scenario in which thousands of trucks are delayed by customs checks. Few people I meet on the streets of Dover, however, believe such delays are really going to be a problem.

Stephen, a Brexiteer who is happy to have his photo in this paper but won’t give his second name, insists lorries won’t be delayed in the event of a no-deal Brexit.

Customs officials, I say. “But we’re not stopping people going out, just people coming in,” he says. “And that will be France’s problem.”

He thinks that all the issues with leaving are caused by remainer MPs reluctant to enact “the will of their constituents”. He’s a leaver because he doesn’t like “Europe dictating what we do” and because he’s bothered by immigration. “The idle French and the Germans take [immigrants] and put them on a row boat and say, ‘Off you go to England’.”

Stephen’s niece, Catherine, says she doesn’t have any views on Brexit. Why not? “I live in France,” she says. “I have dual nationality.”

What does she do for a living? “I’m a childcare worker but I’m unemployed.”

She didn’t vote in the EU referendum, but she does vote in France. Who will she vote for in the next election there? “Le Pen.”