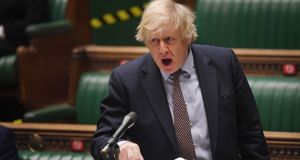 Boris Johnson did not warn the Taoiseach of the impending development when they spoke on the phone on Tuesday. Photograph: UK Parliament/Jessica Taylor/ PA

The EU has angrily objected to a unilateral move by the British government to extend a grace period for post-Brexit checks on some goods entering Northern Ireland from Britain.

Brussels on Wednesday night threatened to resort to legal action over what it said was the second time the UK had sought to breach international law in relation to the special arrangements put in place for the North.

The mood in Brussels was said to be one of anger at the British government, while senior Irish officials feared a further deterioration in co-operation between the UK and the EU on the North could undermine the arrangements.

“This is a big deal,” said one official.

The move was announced without warning on Wednesday after weeks of concerns about impediments to trade between the North and Britain.

Under the agreement between the EU and UK to avoid Border checks on the island of Ireland, some goods are subject to inspection when they pass between Britain and Northern Ireland. This has been criticised by unionists and some Conservatives in London.

However, more stringent checks were due to be introduced when a “grace period” ended later this month. The British government now says it will extend the grace period until October.

The European Commission, warning of legal action, said the move “amounts to a violation” of the Northern Ireland protocol that would break international law. It said it had been blindsided by the move, which it described as a “clear departure from the constructive approach that has prevailed up until now”.

“This is the second time that the UK government is set to breach international law,” the commission said, a reference to the British government’s introduction of the internal markets Bill last year in an attempt to override arrangements for checks on goods moving into Northern Ireland from Britain.

Deputy First Minister Michelle O’Neill of Sinn Féin said she believed the move was “jeopardising” the protections for people in Northern Ireland that had been achieved through the withdrawal agreement and the protocol.

However, First Minister and DUP leader Arlene Foster backed the UK government’s move, saying the end of March was approaching which was a “critical point” in relation to some grace periods.

“Europe has so far refused to deal with that issue, and it would have caused a huge amount of problems for us at our ports, so there was a need to deal with that, so that’s good,” she said, adding that it indicated “they can go further and we need to see permanent solutions”.

The EU and UK lead figures on the issue, Maros Sefcovic and David Frost, discussed the move in a phone call on Wednesday night. It was the first discussion since Lord Frost, Britain’s combative former lead Brexit negotiator, was appointed to manage relations with the EU.

Mr Coveney said London’s move to unilaterally delay checks on goods entering the North from Britain was “deeply unhelpful to building the relationship of trust and partnership that is central to the implementation of the protocol”.

The Minister said he had spoken to Northern Secretary Brandon Lewis and Lord Frost to convey the Government’s position.

Taoiseach Micheál Martin also expressed disappointment at the British government’s move. It is understood the British prime minister, Boris Johnson, did not warn Mr Martin of the impending development when they spoke about a possible joint bid to host the 2030 World Cup and other issues in a telephone call on Tuesday.

However, Mr Johnson is understood to have stressed that his government wants to see “pragmatism” in the application of the protocol, a point he has made repeatedly to Dublin and Brussels, sources said.