Brexit continues to be dominant concern for Irish tourism 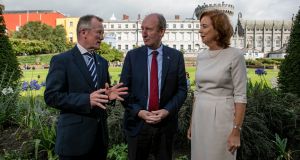 Brexit continues to be the dominant concern for the Irish tourist trade and the fall in the value of sterling has made holidays here more expensive for British visitors, the all-island body Tourism Ireland has said.

Publishing its mid-year review on Tuesday, the organisation welcomed the 6.7 per cent growth in visitor numbers to Ireland in the first half of 2018 compared to last year.

Figures from the Central Statistics Office show 307,000 more arrivals this year than in 2017.

At a briefing in Dublin, Minister for Tourism Shane Ross and Tourism Ireland chief executive Niall Gibbons outlined what had contributed to the tourism growth so far this year.

They also discussed the challenges to sustaining growth into 2019 and beyond.

These include external factors such as oil price rises, changes in the fortunes of key markets such as the US, international trade barriers, and air travel disruption.

Other challenges include capacity constraints in Dublin and tourism hotspots, they said, adding that Brexit dominated “all other uncertainties”.

“Most tourism companies around Ireland will be affected by Brexit, so continuing to defend our share of this most competitive market is essential. The shift in the sterling/euro exchange rate has impacted our competitiveness and has exacerbated the perception of higher prices here than in Britain; it has also made Britain more affordable for visitors from many of our top markets,” a statement from Tourism Ireland said.

Mr Ross said he was very encouraged by the overseas visitor figures for the first half of 2018.

“The tourism sector continues to prosper and, in doing so, it benefits the wider economy in terms of revenue and jobs,” he said. “The sector now sustains approximately 240,000 jobs in communities around the country.”

Mr Ross said it was “essential” that we sustain this growth from as wide a range of markets as possible in the face of challenges such as Brexit, oil prices and other international economic uncertainties.

“There is no doubt that competitiveness and value for money are vital to sustaining growth in the industry in the next few years. The continued growth of the sector over the last number of years is testament to the great work being done all across the sector and today, I want to congratulate Tourism Ireland on their continued success in marketing the island of Ireland abroad as a tourist destination.”

Mr Gibbons noted the growth in visitors to Ireland had come from all the main markets around the world, including Britain, North America, Mainland Europe, Australia and emerging markets.

“We have seen an excellent performance so far from North America – up 10.7 per cent on the first half in 2017, making it another record year,” Mr Gibbons said.

“Ireland now welcomes 10 per cent of all American visitors to Europe – particularly noteworthy given the intense competition from other destinations. It has also been the best ever first-half performance from mainland Europe (+10.2 per cent), with important markets like Germany, Italy and the Nordic region all recording really good growth.”

Mr Gibbons said while Tourism Ireland very much welcomed the first-half performance, it was “certainly not complacent” and was aware of the need to address certain challenges to sustain growth into the future.

Autumn promotional material produced for the tourism body will include an online film starring Ed Sheeran and X-Factor presenter Dermot O’Leary, telling fans and prospective British visitors why Ireland is such a great destination.