Boy (16) dies after being hit by car in Co Limerick

Shock in Adare after death of teenager in early hours; gardaí appeal for witnesses 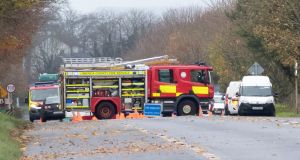 The scene at Garraunboy, Adare, Limerick where a teenager was killed by a car in the early hours of Sunday morning. photograph Liam Burke/Press 22 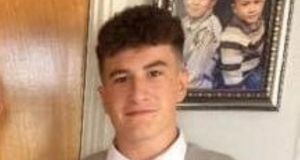 Gardaí believe a teenager who died Sunday after being struck by a vehicle in Co Limerick was walking home from a house party.

The incident involving the 16-year-old, named locally as Nathan Lawlor Hough from Rathkeale, happened at around 3.45am on the N21 Limerick to Tralee road.

It is understood that Nathan had been at birthday party in the area and was walking home when the incident happened.

“He was a gorgeous looking fella and everyone knew him as a good guy,” a source said.

When gardaí arrived at the scene of the collision an ambulance crew was already treating the teenager but he was pronounced dead at the scene.

A postmortem is due to be carried out on the teenager at University Hospital Limerick on Monday.

The male driver of the car involved was not injured and was helping gardaí with their enquiries, a garda source said.

A garda spokeswoman said: “Anyone with information is asked to contact Newcastle West Garda Station on 069 - 20650, the Garda Confidential Line on 1800 666 111 or any Garda Station.”