‘Boxer’ Moran has the aura of a champion among Athlone fans 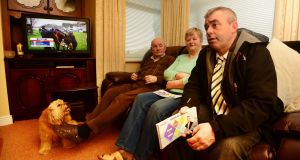 Boxer Moran is used to fighting the big boys. When he was 12, Kevin Moran, as he was more commonly known then, decked an opponent on an Athlone football field because he felt a teammate had been wronged

Although he was more than a foot shorter than the wrongdoer, he still hit him a slap. His coach could hardly condone such behaviour but clearly viewed it benignly and gave him a new name. It just stuck.

“The only person who didn’t like it was my grandmother,” he recalls sitting in the front room of long-time political ally and Athlone native Billy Golden ahead of a Sunday afternoon canvass. “Everyone calls me Boxer. Even my sons and my wife. Unless she’s mad at me. Then she calls me Kevin.”

Boxer will be taking on the big boys againin the fight for a seat in Longford Westmeath under the umbrella of the Independent Alliance.

“I think I’ll win,” he says. “I hope I do. It would be the culmination of a dream that has lasted at least 17 years. I think Robert Troy will top the poll for Fianna Fáil and after that it’ll be Fine Gael’s James Bannon. It’ll be a fight for the last two seats. I’d love to say I’d get the third but I’ll be in a scrap for the last one.”

If he is to win he must unseat either Labour’s Willie Penrose or Fine Gael’s Gabrielle’s McFadden. In an effort to come out on top he has pushed three key issues hard. “Mental health and rural crime are the two biggest concerns,” he says “And there’s jobs. Rural Ireland has been left behind, that is what people are saying to me.”

Rolled up his sleeves

He ran as an Independent in the last election and again in the byelection which was won by McFadden. Now the former Fianna Fáil councillor – he quit the party more than seven years ago in a row over candidate selection – has opted to throw his lot in with Shane Ross’s Independent Alliance.

“When I ran as an Independent, people used to ask me what I could I do on my own. I felt I needed to be affiliated with a larger group. We can make a bigger difference together.”

Canvassing in Coosan, the townland where he grew up, is easy for Boxer. Everyone knows his name and everyone loves him. As we walks along a country road a motorist pulls up to shake his hand. “Anything that needs to be done he’ll get it done,” the driver says. A man tending his garden looks up as Moran walks past.

“What’s wrong with you Boxer,” he shouts. “I’m okay,” says Boxer. “I’m just out canvassing. How are things with you?”

“Well there’s no point in giving me a leaflet,” the man says. “Sure I wouldn’t give my number one to anyone else.”

The reception is so positive it could almost have been stage managed. At the next house Boxer suggests things might be more frosty. He rings the bell. The door opens. “Well done,” says the homeowner without anything by way of a more traditional greeting. “Your 2-to-1 on with the bookies to get the seat,” he continues. “And the bookies are never wrong!”

Not such a frosty reception then? “You’ll be sound here anyways,” says a man at the next house. “You have three number ones in the bag here.” Boxer shakes his hand and moves on. Theres a lot done but he knows there’s more to do.