Survey describes feeling of ‘ voicelessness which exacerbates the sense of anxiety’ 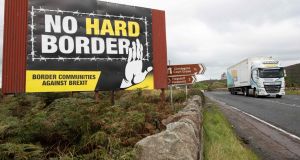 Many people living along the Border have an “overwhelming feeling of uncertainty” as a result of Brexit, according to a new report by researchers at Queen’s University, Belfast (QUB) and the Irish Central Border Area Network (ICBAN).

Those surveyed also described how Brexit had already had an economic and social impact on their lives and future plans, and had put off making financial or business decisions, or had experienced major changes such as the loss of a job or problems in labour recruitment because of Brexit.

Many felt a “related sense of insecurity” which was “exacerbated by ongoing speculation about what the future for the Border might be.”

The Border Into Brexit: Perspectives from Local Communities in the Central Border Region of Ireland/Northern Ireland is the third in a series of reports by QUB, in association with ICBAN, which study the views of Border residents on Brexit.

More than 500 people from Cavan, Donegal, Leitrim, Monaghan and Sligo in the Republic of Ireland, as well as those in the council areas of Armagh City, Banbridge and Craigavon, Fermanagh and Omagh and Mid Ulster in Northern Ireland, contributed to the research.

The report also described a “feeling of lack of political representation and voicelessness which exacerbates the sense of anxiety.”

“I feel very angry that there is no one to represent my voice in the UK Parliament - and also in our local Assembly,” said one respondent. “This is the area and the people that are likely to be most affected and where are the leaders representing us?”

The first phase of the research was carried out before the Brexit deadline on October 31st, when the risk of a no deal Brexit appeared highest, while the second phase was conducted after the UK prime minister, Boris Johnson, had concluded his revised Withdrawal Agreement with the EU and Britain’s withdrawal deadline had been extended until the end of January.

In this context, more than four out of five of those surveyed felt the likelihood of a hard Border had increased since 2018.

“Regardless of views of its likelihood, a harder border is unanimously seen as a retrograde step” and was “associated with conflict in the minds of people of all generations.”

For this reason, the report found, the prospect “fear and anxiety for many.”

One respondent said: “I am frightened. I don’t think I could go back to living with the old order. Before I didn’t know any better, thought it was normal; now I know [it isn’t normal] and I don’t want to go back.”

One of the report’s authors, Dr Katy Hayward, said that the “Withdrawal Agreement - objected to by all 18 newly-elected MPs from Northern Ireland - looks set to be ratified, and so Brexit appears likely to see change, to some degree, to borders all around Northern Ireland, as the new UK-EU relationship takes effect.”

“In light of this,” she said, “trust-building and cooperation, north-south and British-Irish, will be more important than ever.

“The models and examples of such cooperation in the Central Border Region, as presented in this report, are ones that should be valued and built upon.”

Meanwhile, new demographic information on the Border region released by the Central Statistics Office has shed further light on the region. It shows that 128,106 people live within 10 km of the Border on the Republic side, with 14,205 living within 2 km - classed as a half-hour walk.

However, the number of people commuting from this zone across the Border to a permanent job in Northern Ireland was relatively small at just 3,638, or 6.1 per cent of the working age population. This does not include mobile workers such as delivery drivers, or farmers who might farm both sides of the Border, or transport goods or animals across the border on a daily basis.

The CSO also identified that there was a higher vacancy rate among the housing stock within 10km of the border. There were 6,857 vacant dwellings, giving a rate of 12.7 per cent, which rose to 15.7 per cent within 2 kilometres of the Border. This compares to a general vacancy rate across the state of 9.4 per cent. However, the housing stock is generally newer than elsewhere in the country, with 26.9 per cent of dwellings built between 2001 and 2010, compared to a wider figure for the state of 25.4 per cent for the same period.

Monaghan is the Border county with the highest proportion of its population living less than 10km from a border crossing, at 64 per cent, followed by 33 per cent in Louth and 22 per cent in Donegal. Just 6 per cent of the population of Leitrim lived within the 10km zone, however. The population across the five counties surveyed increased marginally between 2011 and 2016, by just over 1,300 people.