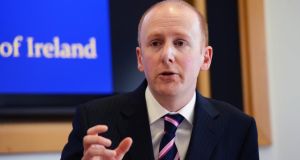 Bank of Ireland has been criticised by the head of the Insolvency Service of Ireland (ISI) Lorcan O’Connor for adopting a “very blunt” approach to its dealings with distressed borrowers. Mr O’Connor is updating the Oireachtas Finance Committee on the performance of the ISI since it starting taking applications for insolvency last summer.

He said that while the number of applications for insolvency remained relatively low, the ISI had focused minds and forced banks to do deals with borrowers unable to service their debt.

He said that before the ISI’s spending guidelines were published last April, negations between banks and borrowers “never passed go” but that since the autumn “we have seen a growing number of solutions” put in place.

Addressing comments made to the committee by Bank of Ireland chief executive Richie Boucher earlier this month in which he said his bank would seek to veto any proposal from Personal Insolvency Practitioners (PIP) featuring mortgage write-down for its customers, Mr O’Connor said it “a very blunt approach” that was divorced from the “new reality” of the situation in many circumstances.

Mr O’Connor also warned banks that if the ISI felt that it had “hit a brick wall” when it comes to negotiations between banks and borrowers it would recommend changes to the legislation which effectively hands banks a veto on all arrangements.