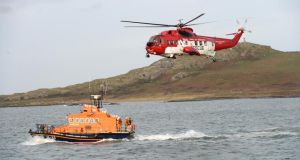 One diver has died after getting into difficulty off the coast of west Cork. A search operation for a second diver is underway. Photograph: Dara Mac Dónaill/The Irish Times

Gardaí are to get experts to examine the diving equipment used by two English divers as part of the investigation into their deaths off West Cork today.

The two men, aged 66 and 61, both experienced divers, died while diving on the wreck of German U260 submarine off Glandore.

Their deaths bring to four the number of people who have died in diving accidents in Irish waters in the past month.

The two men were among a group of four exploring the second World War wreck, which lies about 6km offshore in 42 metres of water, from the Wave Chieftain dive boat, which is operated by Baltimore company Aquaventures.

They had come back up to the surface at about 9.30am but opted to go back down again. It is believed they may have come up too quickly and may have had gone back to a lower level to decompress.

The alarm was raised when the pair failed to reappear. One of the men surfaced unconscious a short time later and was taken aboard the Wave Chieftain.

He was airlifted by the Irish Coastguard Sikorksi helicopter from Shannon to Cork University Hospital but was pronounced dead soon after arrival.

A search for the second man involving the Irish Coastguard Silorski helicopter, Baltimore RNLI, the Naval Service and local boats then began.

Just before 5pm, Lt Commander Alan O’Regan of the LE Aisling, which was co-ordinating the search at the scene, confirmed the body of a second man had been recovered from the sea.

It is understood the two men were friends who had travelled to West Cork for a diving holiday and were due to return to the UK on Saturday.

While neither man is being formally named by gardaí until all next of kin are notified, it is known the 66-year old-man was from Surrey while his friend was British but based in Australia.

Gardai took possession of the men’s diving equipment when the Wave Chieftain berthed at Union Hall. It will be examined by experts as gardai prepare a file for the Coroner’s Court.

Father of one, John McNally (45) from Bruff in Co Limerick died when he got into difficulty diving off on a German U-boat off Roches Point at the mouth of Cork Harbour on June 14th.

A day later, a 45-year-old Polish man died when he got into difficulty during a dive with four others on a wreck near Inishtrahull off Malin Head, Co Donegal.