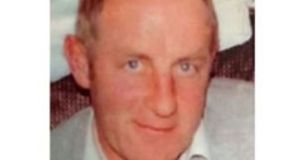 Police searching for the body of a man missing for 18 years have discovered human remains in Lough Erne, the PSNI confirmed on Thursday.

Police believe the remains are those of Michael “Tony” Lynch, who was reported missing on January 9th, 2002.

The breakthrough in the missing persons case came on Monday when a car, a white Mitsubishi Gallant, belonging to Mr Lynch, was found submerged in the lake.

Mr Lynch (55) was originally from Co Fermanagh but lived in Clones, Co Monaghan. He was last seen on January 6th, 2002.

“Police can confirm that human remains have been found following the recovery of a car from Lough Erne in the Corradillar area of Fermanagh on Monday May 18th,” said a PSNI spokesman.

“The vehicle was located underwater by police divers and recovered for examination and is believed to be the Mitsubishi belonging to Michael ‘Tony’ Lynch who went missing from his home in Clones, Co Monaghan, 18 years ago,” he said.

“We are liaising with colleagues from An Garda Síochána, who are investigating Mr Lynch’s disappearance,” added the spokesman.

The car was discovered by divers on Monday and taken away for examination. A cross-Border search for Mr Lynch also took place in January this year involving Gardai and PSNI officers assisted by Civil Defence members.

Searches took place in ten lakes in Co Monaghan, but searches were suspended in March following the outbreak of Covid-19.