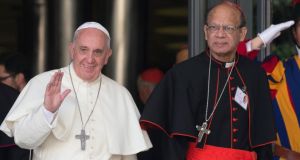 Pope Francis is flanked by the Archbishop of Bombay Cardinal Oswald Gracias. The cardinal has said “everybody is travelling in a particular direction, basically in harmony without complete uniformity”. Photograph: Alessandra Tarantino/AP

Pope Francis closed a dramatic Vatican Synod on the Family yesterday with a mass in St Peter’s, during which he beatified Pope Paul VI. Pope from 1963 to 1978, Paul VI is the pontiff best known to the secular world for having affirmed the Catholic Church’s ban on contraception with his 1968 Encyclical, Humanae Vitae.

On the day after the last session of a divided Synod, which saw bishops disagree on the pastoral approach both to gays and to the divorced and remarried, the pope nonetheless praised the work of the synod. He called on the Holy Spirit to continue guiding the synod on a “journey”, which will see it reconvene in October 2015 to conclude the work of the past two weeks.

Much as expected, however, the synod wrapped up on Saturday night with a final document that appeared to backtrack on the controversial mid-synod Relatio document issued last Monday.

While that document spoke of “welcoming” homosexuals into the church family, Saturday’s final document stated that there can be no comparison between “God’s design” for men and women and the concept of same-sex marriage. The document did warn against “unjust discrimination”, calling for gay people to be received with “respect and sensitivity”.

With regard to the other “celebrity” issue, namely the ban on the divorced and remarried receiving communion, the document suggests that attempts to change this teaching “needs to be further considered”.

The level of disagreement on these two issues was further underlined by the synod vote count, where even the watered-down proposals on homosexuality and communion for the remarried failed to secure a two-thirds majority.

Asked by The Irish Times if these tensions represented a clash between Africa/Asia and Europe, the Archbishop of Bombay, Cardinal Oswald Gracias, said on Saturday that there were “different needs, different backgrounds, different cultures but . . . everybody is travelling in a particular direction, basically in harmony without complete uniformity.

“Are gays welcome? I would say certainly, yes, they are welcome, they are very much part of the church and we care for them.”

While many commentators consider the final synod document a success for traditionalist elements, and in that sense perhaps a setback for Francis, the pope himself hardly sounded downhearted when he addressed the final synod session on Saturday night.

Warning against the intellectual “temptations” of “traditionalist hostility” on the one hand and “destructive do-goodery” on the other, the pope defended the synod’s working, saying that he would have been “very worried and saddened if there had not been these temptations and these animated discussions”.

Ironically, even as the synod was repeating church teaching on same-sex unions, on the other side of the Tiber, the centre-left mayor of Rome Ignazio Marino was registering 16 same-sex marriages, contracted outside of Italy, in defiance of Italian law. His move prompted immediate and contrasting reactions.

On the one hand, the Italian Bishops Conference immediately objected to what it called an “unacceptable . . . arbitrary presumption”. On the other hand, Italian prime minister Matteo Renzi promised that his government would shortly introduce some form of same-sex union legislation.

1 Children found dead in their Dublin home were murdered
2 The real Contagion virus is out there and it’s causing virologists to worry
3 Young homeless mother may have been dead in tent for a number of days
4 Cork shootings: Gardaí believe older son was shot multiple times
5 Aldi, Lidl bow to pressure to ban non-essential ‘middle aisle’ sales
Real news has value SUBSCRIBE