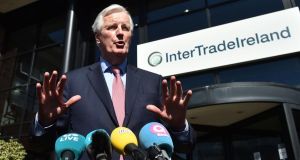 The European Union’s chief Brexit negotiator, Michel Barnier, came to the Border again and crossed it but first had to deny that the “backstop” option for the post-Brexit frontier was an EU land grab for Northern Ireland.

The suggestion, in a question from a journalist with the pro-Brexit Daily Telegraph, shows the extent to which the political noise in London around the negotiations on Britain’s departure is making Barnier’s job so difficult.

“We have no intention of questioning the UK’s constitutional order,” Barnier told the All-Island Civic Forum on Brexit in Dundalk. “This is none of our business.”

Almost two years since the UK voted to leave the EU and less than a year until its departure, nobody is any clearer about what Brexit means for the Border – and the temperature around Brexit is still too high to figure it out.

Barnier, on his second visit to the Border since Brexit, said this was exactly why he had come to visit both sides of the Border: to find “technical and practical solutions to assure safety controls” that protect the EU’s single market and, he suggested, the UK’s internal market too.

The clock is ticking down to the next critical deadline in the Brexit negotiations, the European Council summit of EU leaders at the end of June

“We have to de-dramatise this point to avoid any kind of ideology,” he said.

“There is absolutely no question of Ireland or the European Union being interested in a land grab,” stressed Taoiseach Leo Varadkar, sharing a stage with Barnier and Tánaiste Simon Coveney.

The clock is ticking down to the next critical deadline in the Brexit negotiations, the European Council summit of EU leaders at the end of June, and the issue of how to maintain an invisible border remains unresolved.

So far, the only solution on the negotiating table is the backstop, the default position that will effectively keep Northern Ireland in the customs union and parts of the single market.

It is an option the UK has agreed to and conceded should be covered by a legal text in the Brexit treaty, but it does not want it and has so far failed to agree to the legal text or proposed an alternative acceptable to the EU.

In an attempt to keep the pressure on the British to come up with other concrete proposals, Barnier, Varadkar and Coveney displayed a unified line of offence here near the Border. The three were “absolutely united,” the Taoiseach said, in seeking “meaningful progress” by the June summit.

Barnier suggested June was a “stepping stone” to October’s deadline for a final Brexit treaty but warned that until there was agreement on an operational backstop, there was “a risk” of a disorderly Brexit.

He inadvertently had a dig at Davis when he took a question from a Northern Irish journalist about Davis believing the backstop wasn’t necessary.

If they insist on imposing this self-inflicted wound, it is probably something that we can take advantage of

“Who?” he asked, not quite catching the Northern accent. The backstop was there not to change the UK’s red lines (leaving the EU single market and customs union), he replied, but “because of the UK’s red lines”.

The heaviest punches were thrown by Opposition politicians during the forum’s plenary session.

Fianna Fáil leader Micheál Martin spoke about the “massive contradiction at the heart of the UK government’s negotiating position” – how to leave a single market and customs union and avoid creating a hard border.

Labour leader Brendan Howlin referred to the “civil war” that had erupted in the UK Tory party over Brexit. Independent Alliance Minister Shane Ross suggested that England’s difficulty should be Ireland’s opportunity.

“If they insist on imposing this self-inflicted wound, it is probably something that we can take advantage of,” he said, pointing to the opportunities for financial services and tourism.

While Barnier wants no drama, no visit to the Border area by anyone so connected with Brexit could avoid it.

Hours before his visit, DUP leader Arlene Foster questioned Barnier’s honesty as a broker. He was “not ready to engage in polemics,” Barnier replied, calmly.

For some hard Brexiteers, they do not seem ready to move beyond them.