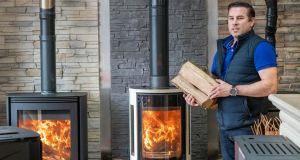 Wayne Hurst of Hurst Heating and Plumbing Supplies in Castlebar, with some of the wood-burning stoves which have been selling well following the bituminous coal ban. Photograph: Keith Heneghan

Six months after the burning of smoky coal was banned by the State in Castlebar, the Mayo town is showing slight, but encouraging signs of an improvement in air quality.

However, as the Government prepares to make the ban nationwide, the most immediate and obvious change brought is on the burning of timber, and the stoves favoured to burn them.

The slow but inexorable move away from burning coal in homes started with the first ban introduced in Dublin by Mary Harney during her time in the Department of the Environment in 1990.

“We still keep some Colombian and some Polish coal but only for people living outside the town,” says student Harry Foy, who helps out at Castlebar Fuel’s Homefire Depot, a small drive-in outlet near the centre of the town.

Since September, anyone selling smoky coal in Castlebar, or any of the other designated towns, must to ask would-be customers where they intend to burn the fuel. If the answer is inside town limits, then it’s sorry, no deal – smoke-free coal or wood briquettes only.

For Wayne Hurst, the most noticeable change has been the switch to wood.

“Timber sales have gone through the roof,” he says.

Wood deliveries to his store come by the container load. Before the ban, he ordered about 20 a year. But not in 2021.

Each container carries 30 pallets, each with a 400kg bag of kiln-dried beech logs from northern Spain or Lithuania. Each bags sell for €185, (or €195 delivered). Transport from source to Ireland makes up a third of the costs.

“They fly out the door,” says Hurst. “But what’s really gone through the roof is wood pellets – sales are up about 500 per cent in the past three years.”

Already this year, he has sold 20 wood-pellet stoves, which start at about €1,200 each for room heaters, and €3,500 for a combined room heater and boiler system for full home heating.

A similar surge in wood sales has been seen at the providers firm Archers. There, smoky coal sales have dropped by 37 per cent since September, with supplies now confined to buyers outside Castlebar, west to Newport and into Achill.

“Our timber sales are up about 50 per cent,” says general manager Seamus Hastings. “We do 400kg crates of kiln-dried ash, birch and oak, imported from Latvia. Wood’s been the big winner; it’s perceived as clean.”

Not burning coal or turf has environmental benefits, he acknowledges: “But then you’re importing from the likes of Latvia and what’s the carbon footprint of all that transport?” he wonders.

Enforcement of the rules is difficult for local authorities, especially in towns with a rural hinterland. Nevertheless, Patrick Kenny of the Environmental Protection Agency welcomes any measure that improves air quality.

Sensors at the agency’s Castlebar offices monitor local air quality. Yesterday, it was classified as “good”, though it can frequently fall into the “moderate” category. The only Irish reading for moderate yesterday was for Ballyfermot in Dublin.

According to IQAir, Castlebar’s air quality index (AQI) yesterday was 41, down from between 53 and 60 in previous days, where values at or below 100 are deemed to be satisfactory.

By way of contrast, Dhaka in Bangladesh is classified as “very unhealthy”, scoring 226. The State’s cleanest air on Wednesday was in Cork, with a reading of just 11. In Northern Ireland, Belfast had readings between seven and 10.

The main air pollutants in Castlebar are PM2.5 and PM10 – the first covers very fine microscopic particles that can get into the lungs and bloodstream. The larger PM10 particles are the ones that irritate the eyes, nose and throat.

The EPA has detected a slight overall improvement in Castlebar’s air quality since the ban came into force, compared with the 2019/2020 winter , and bearing in mind that this winter’s data for the town remains incomplete.

Then, the town’s average PM10 reading was 15.97 micrograms (one-millionth of a gram) per cubic meter. So far this winter, the reading is 14.39 – a “slight decrease”, as Patrick Kenny acknowledges, but a move in the right direction.