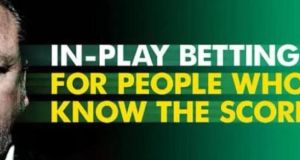 The Labour Party has called for a ban on advertising by gambling companies, saying it is “poisoning” families.

However, the party stopped short of calling for an immediate ban on sports sponsorship, despite party sports spokesman Senator Mark Wall saying there was a “normalisation of gambling and sport” that is “being interlinked by gambling companies”.

Aodhán Ó Ríordáin, the party’s spokesperson on enterprise and trade, said the party had considered including a ban on sports sponsorship, “but that’s a longer conversation and a more complex conversation and would have far-reaching impacts if there wasn’t replacement funding”.

He said gambling addiction is “poisoning individuals and families across the country”.

However, Mr Wall said public health concerns should ultimately trump concerns about funding for sports, as they had done for alcohol and tobacco advertising. “There is a conversation to be had about sports sponsorship and sports funding, but you can never justify that, the damage that’s being done to individuals,” he said.

“Gambling advertising is in your face, it’s constant, and what we have to do now is try and address that,” he said.

The party published a draft Bill on Tuesday, alongside a public consultation seeking input on the final Bill, which will be introduced in the Seanad, from the public. Mr Wall said the legislation contained an “opt out” clause for charities, that would cover raffles for GAA clubs and similar events.

There would also be carve-outs for national lotteries, and sponsored events could still be broadcast.

Mr Wall said an estimated 40,000 people are suffering from gambling addiction in the State, and that one in eight who begin gambling will ultimately end up with an addiction.

Separately, Mr Ó Ríordáin likened the Department of Education to a “dysfunctional debs committee” and called for immediate clarity on the reopening of schools, and plans for the Leaving and Junior Certificate examinations.

The Dublin Bay North TD, who is also the party’s education spokesman, said: “It’s come to the situation where we can’t believe anything that comes out of the Department of Education when it comes to potentially having the Leaving Cert decision made or school openings”.

He said the Government should concede the Junior Cert will be cancelled, saying the lack of clarity was an issue “for some disadvantaged young people who may depend on the Junior Cert for their entry into the labour market, it’s pretty dismissive of them and their lives and their life chances and career path”.

The College of Psychiatrists welcomed the proposed legislation. Prof Colin O’Gara, consultant addictions psychiatrist, said: “We cannot continue to ignore the links between problem gambling and the enormously high volume of betting ads we are seeing at present.

“Betting has become strongly linked with the enjoyment of sports. We are normalising gambling as a behaviour,” he said.

“Much like tobacco, in ten years I think we will look back on the proliferation of gambling advertising in sport and entertainment and ask ourselves how we let it get so out of control.”