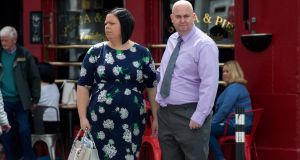 A woman wept on Thursday as she recalled failures of communication and missed warning signs that occurred before her baby suffered brain damage during birth and subsequently went on to die.

Dr John Bermingham, a consultant obstetrician gynaecologist at UHW said he wasn’t on duty on October 17th, 2016 when Mrs Krystle Hunt of Tramore presented at the labour ward with her husband Trevor.

Following a comprehensive review of the case, he said that there is no doubt that warning signs were missed and that there were “missed opportunities” in the birth of Eli.

Coroner Philip Comyn heard that Mrs Hunt had the Strep B infection sepsis and a raised temperature at 11pm on October 17th.

However, seven and a half hours passed before she was taken to theatre for an emergency C Section.

Saying the hospital had waited seven hours too long, Dr Bermingham said “If I had been on call I would have sectioned that lady. I am not a fan of protocols. Picking up the phone (to the consultant) is the best protocol of all.”

Dr Bermingham said that when Mrs Hunt came to the hospital with a temperature there should have been an immediate decision to speed up her birth. The presence of Strep B compounded the situation.

“There were a lot of failings here, chiefly in communications. But there was a failure to attend to the patient which is what every registrar is expected to do,” he said.

The inquest heard that a blood test showed that Mrs Hunt had sepsis. However, this was not entered on her chart and was not communicated to the anaesthesist who administered an epidural and topped it up twice afterwards.

Epidurals are not recommended for patients suffering from this type of blood poisoning.

Pathologist, Dr Peter Kelehan, said that Eli died from brain damage arising out of an inflammatory response due to ascending amniotic fluid infection arising from the Group B Streptoccocal infection.

Mrs Hunt said that she and her husband Trevor had been trying for a baby for six years and were expecting a normal delivery. Nothing could have prepared her for the death of her much longed-for first child.

“I brought my son home in a tiny white coffin. This was not how I imagined bringing my first born home. If I had known at the time I had sepsis, I would have been shouting from the rooftops to get my baby out”.

“We spent every waking minute with Eli. We took his ventilator off on the Friday evening and prepared ourselves for minutes with him.

“But our perfect little man fought with no help for nearly three days. During this time we had to watch our baby turn blue and gasp for air, each time scared this would be it, and then he would pull himself out of it.

“It breaks my heart to know I kept my baby safe for nine months. I ate well and did all the right things. He was a big, beautiful baby and his body and organs were perfectly formed.”

Changes in protocol and training have taken place at UHW following the death.

A verdict of medical misadventure was recorded. Coroner Philip Comyn praised the couple for the bravery shown during the inquest.

The jury welcomed the changes brought in at the hospital, and said procedures should be reviewed regularly.

Communication at the hospital should improve, too, they said. Extending sympathy, hospital management said they understood the devastating experience faced by the Hunts.