‘In Ireland, humans stories became the cornerstone of our campaign’

As Australia's high court continues a hearing on the validity of a government plan for a postal vote to legalise same-sex marriage, campaigners are taking inspiration from Ireland's marriage equality campaign. 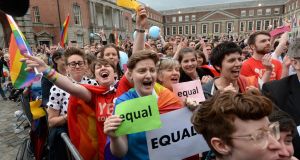 The Australian campaign for marriage equality has followed in the footsteps of Irish campaigners by asking parents and grandparents to speak about their decision to vote yes on social media.

A video posted by the AU Marriage Equality campaign this week shows 65-year-old Tony taking a slug from his bottle of VB lager before filling out his survey form from the Australian Bureau of Statistics.

“I have experienced love in my life with my family, my wife, my son and my lovely daughter Kiki who is filming this right now. But I’ve also seen much love in gay men and women in my life as well. And I admire them. Here’s to equality.”

Tony’s short video is just one of many clips that have begun flooding social media in recent days calling for Australians to vote in favour of the legalisation of same-sex marriage.

#Ringyourrellos, which shows young people discussing the referendum with their parents and grandparents, has also gathered momentum across Twitter in recent days.

Just like the Irish referendum, Australian Yes campaigners want to make the vote a conversation about “real people’s lives” rather than a political debate.

Former political director of Ireland’s 2015 Yes Equality campaign and current director of Australians for Equality, Tiernan Brady, says the focus is on the “power of the human story”.

“People here need to see the issue through the eyes of people they can relate to,” says Brady.

“The father in that video, there is nothing more Australian than having a beer on a deck and talking about family.”

“There’s the Vietnamese grandmother who tells her story about why all she wants is the best for her grandson. Or the farming family from western Australia who have two sons, one of whom is gay.

“It allows people to see that marriage equality doesn’t take away from anyone. It means everyone in our families are equal and can have the same aspirations.”

The Australian postal vote on same-sex marriage began on September 12th and will last until the end of October.

Australians taking part in this non-compulsory ballot must return their forms by November 7th with the result due to be announced on November 15th.

“This is a marathon rather than a sprint,” says Brady.

“People started receiving their forms seven days ago and there are still 49 days to go. But you can sense there is a genuine energy emerging, just like in Ireland. ”

Brady moved to Australia last year after he was invited by Australia’s Human Rights Commissioner, Tim Wilson, to lead the Yes campaign.

“Who could possibly walk away from the opportunity to take some of our learning in Ireland and hope that it could bring further learning in Australia. I don’t believe any country has all the answers to how this works but in Ireland, humans stories became the cornerstone of our campaign.”

Similar to the campaign in Ireland, knocking on doors and sharing personal stories does cause stress for campaigners and Brady says there has been a significant uptake in the demand for support services from the LGBT community.

“Every day people have to get up and read the newspapers and go on social media where they see the most terrible things being said about them. Australia is going through that right now just as Ireland did.”

Brady is calling on all Australians, including Australians living in Ireland, to use their postal vote and add their voice to the debate.

“Over a million people added their name or updated their address. It gave us a taste that young people understand that this is about defending their friends and standing up for their family. They’re not going to sit it out.”