At RTÉ briefing staff ‘reacted with cat-calls and boos’ 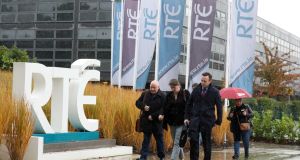 Such was the interest in Dee Forbes’s “town hall” style meeting on Thursday morning that it had to be screened on TV sets around Montrose, RTÉ’s headquarters, to accommodate those who couldn’t get in.

One staffer glumly hoped that the powers-that-be weren’t relying on the RTÉ Player, the station’s online on-demand service, to transmit the meeting. “There’ll be seven minutes of ads, and then it’ll just turn off.”

Speaking to the crowd in Studio 4, Ms Forbes, RTÉ’s director general, opened with a well-practiced speech on the broadcaster’s financial woes, how they got there, and how they planned to get out of it. She targeted the Government, skewering it for failing to reform the licence-fee system. However, any hope that the anger in the room could be transferred to the State broadcaster’s political masters was in vain.

By the time Jon Williams, RTÉ’s managing director of news and current affairs, came to speak, the crowd’s patience had been exhausted. As he started addressing the room a member of staff sitting in the audience shouted “can you introduce yourself please”.

Mr Williams tried to make the point that if RTÉ was to be saved, it would take the collective efforts of its entire 1,800-strong workforce, not the nine-member executive board. Staff, tired of being told they were living way beyond their means, reacted with cat-calls and boos. One source said Mr Williams was “bullish” rather than other, more “sheepish” speakers. “Jon would have been better off recognising that this is a day to keep his mouth shut,” remarked another source.

After Mr Williams was heckled, Ms Forbes came to his rescue, intervening by saying “what Jon meant to say . . .” which was met with laughter. It was a rare light moment in an otherwise tense 75-minute address.

It was pointed out to The Irish Times that Ms Forbes and RTÉ chairwoman Moya Doherty were acting “extra friendly” in front of the gathered audience with one member of staff remarking that it felt “rehearsed”. There was an awkward moment between the two women when Ms Forbes invited Ms Doherty to join the question panel alongside the executive board but she refused and remained in her chair.

Away from the fraught choreography of the meeting, staff are more immediately focused on the prospect of wage stagnation, or worse a cut in take-home pay.

There is an open question surrounding the wide range of benefits and entitlements which staff may consider part of their core pay. However, insiders say that the picture of a cosseted workforce whose incomes are healthily supplemented by additional payments is out of date.

Long-standing complaints about the broadcaster’s content are also ever-present. “When you look at so much of our output, it’s so stale and safe compared to the BBC. There’s been no imagination or investment in young talent for a long time. We have people at the top bringing in people with the same narrow ideas as them, they don’t realise that they’re the ones who have to change,” said a source.

Another staff member said of the meeting: “I didn’t see an innovative vision of how they propose to save the station. I didn’t see it. Dee talked about the [RTÉ] Player, but at the moment it’s a joke with the amount of problems with it.”

The much-maligned online service, management plead, has a heavy burden to shoulder compared to on-demand services such as Netflix and Amazon Prime. Rather than simply serving stored content to smallish audiences, it has to deal with huge live audiences logging in from across the world for sporting events, or big news stories. Be that as it may, there is an acceptance that the current player is not fit for purpose, and that it needs major investment if it is to take its intended place as a core offering alongside RTÉ1.

Leaving aside the future strategy, the cutbacks to come, or gripes about day-to-day management failings, there is a deeper and more fundamental malaise at RTÉ. It is driven by the sense that leadership at the station is poorly matched to the mammoth task of plotting a successful course for RTÉ through a media market that is rapidly and fundamentally changing.

“There’s a lot of people who are, understandably, very, very worried about their futures,” one source said. “Crucially, they have absolutely no confidence in this management team or the Government to address this in a timely fashion. And they know enough about the finances of this place to know that it will not be here in five years unless something radical happens.”