Ashes of War of Independence veteran interred in Cork 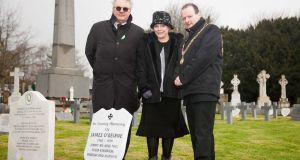 Ranelagh and Elizabeth Ranelagh with Lord Mayor of Cork, Cllr Chris O’Leary at the interment of the ashes of their father, James O’Beirne at Republican Plot at St Finbarr’s Cemetery in Cork on Saturday

The family of a War of Independence veteran have described the decision by Cork City Council to allow his ashes to be interred at the republican plot in Cork as part of the city’s 1916 Easter Rising commemoration as a huge honour for the family.

Elizabeth Ranelagh and her brother John Ranelagh said they were deeply moved to be able to honour their father, James O’Beirne, by interring his ashes at the Republican plot at St Finbarr’s Cemetery alongside his former comrades such as Tomas Mac Curtain and Terence Mac Swiney.

The son of an RIC Constable, Mr O’Beirne was attached to the No 1 Cork Brigade of the IRA under Sean O Hegarty during the War of Independence but he left Cork for the United States after taking the republican side during the Civil War when he was shot and wounded by Free State troops.

John Ranelagh, an executive producer on Robert Kee’s Ireland - A Television History and the author of A Short History of Ireland said the family also believed that their father may also have been in Dublin for the Easter Rising with The O’Rahilly even though he was quite young.

“We believe he was born in 1902 - though he may have adopted the identity of a younger brother to escape to America after the civil war - that would have made him just 14 at the time of the Easter Rising but certainly in photos taken by the Dublin Metropolitan Police after his arrest, he looks older.

“Of course, something like 3,000 people ended up claiming they participated in 1916 but fewer than 900 actually did but we went to the exhibition in the Ambassador Theatre where they have a lot of names up there including four or five James O’Beirne or James O Byrne so take your pick.”

Mr O’Beirne emigrated to the US where, in 1946, he married American folklorist, Elaine Lambert Lewis who used to present a radio show Folk Songs for the Seven Million in which she introduced the music of Leadbelly to a wider audience but they moved to Ireland in 1954 with their four children.

Elizabeth Ranelagh (the family name comes from their father adopting the name of the O’Beirne’s historic homeland in Co Wicklow) told how her father came back to Ireland to try and revolutionise farming but he died in Cambridge on May 2nd 1979 and his body was cremated.

Elizabeth said she contacted Cork City Council in 2014 as she wished to bring his ashes back to Cork and together with her brother and other relatives, they interred his ashes at the republican plot in St Finbarr’s on Saturday at a ceremony attended by the Lord Mayor of Cork, Cllr Chris O’Leary.

“I live in Los Angeles and when I came in 2014 looking for a place to put his ashes and discovered there was a republican plot. . . I said that’s where he should be - he devoted his life to Ireland and he loved Cork, Cork meant the world to him so it’s a fitting sort of homecoming.”

John said: “It was only when we went to the graveyard that we realised how it was being incorporated into the Easter Rising commemorations in Cork.

“We were terribly impressed and it was a huge honour for us to have the Lord Mayor present as we laid him to rest with his old comrades.”