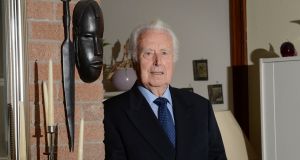 Captain Charles O’Rourke (retired): “Up until 1960 we were a garrison army. Our whole environment was parades and inspections, and all the routine of barrack life. It was a pretty unexciting thing.” Photograph: Alan Betson

The ambush of an Irish Army patrol in Niemba in November 1960 shocked the nation, not least Marie O’Rourke whose husband Charles was serving as a lieutenant in that region of the Congo at the time.*

According to the news back home, eight Irishmen were killed in the attack, including a lieutenant.

Marie had just received a letter from her husband telling her he was to be deployed to Niemba, a place which meant nothing to her or anyone in Ireland at the time.

O’Rourke was not killed, but his friend, and the officer he was due to replace, Lieut Kevin Gleeson, was.

Both men, as members of the 33rd Battalion, were part of the first major Irish peacekeeping mission. Now 60 years on Charles O’Rourke sits in his Deansgrange living room in Dublin going through photographs of himself and Gleeson guarding a derailed train sometime early in their deployment.

He takes out a clipping of The Irish Times from July 19th, 1960, the day after the 33rd were flown out to reinforce the 32nd Battalion, which was deployed a month previously. One photograph shows his wife – “a bride of six days” – waving goodbye to him as he runs towards the plane.

“The press were all eager to get pictures of the wedding but we were told to avoid publicity. They got their photograph in the end,” O’Rourke says,

The men, who signed up to the Defence Forces before July 1960, never envisaged they could be sent into a war zone in central Africa.

The UN requested troops from Ireland on July 13th to help restore order in the Congo, and two weeks later the first Irish troops were on the ground. Within a month over a tenth of the Irish Army – about 1,000 soldiers – were in the Congo.

“Up until 1960 we were a garrison army. Our whole environment was parades and inspections, and all the routine of barrack life. It was a pretty unexciting thing,” says O’Rourke.

“We thought he had gone off his head,” says Robert Seward, recalling the moment he was told by a sergeant major to find volunteers for the Congo. “But the amazing thing is 80 per cent of the garrison volunteered, and it was the same across the entire Army. Most of us didn’t know or care where the Congo was.

“It was great tribute to the logistics side of things because we got two battalions off in a couple of weeks,” says Seward, who was then a corporal.

Despite the organisational triumph the men were poorly equipped with first World War-era weapons and heavy wool uniforms. Seward recalls one American officer asking “were we going to North Pole?”

Niemba was first time the Irish Army faced battle since independence, and it had a deep psychological effect on the men. “There was a dullness and darkness that came over the unit,” says Seward. “They played the funerals over the radio. I think we would have been better off if they hadn’t. But that’s the job of the soldier, I suppose.”

It would be far from the last engagement. The Siege of Jadotville is well-known today, partly thanks to the Netflix film starring Jamie Dornan. Perhaps less well known is the Battle of the Tunnel near Elizabethville (now Lubumbashi) in December 1961.

Retired colonel Peter Feely had arrived in Elizabethville just a week before on a flight which had been raked with gunfire from the ground (“when we got off the plane we saw 30 or 40 bullet holes underneath”).

Feely’s A Company was tasked with taking a railway tunnel held by 150 mercenaries and Katangan gendarmerie which had been firing on the Irish.

“It was pitch dark. We could hardly see where we were going. When we got very close the defenders opened fire. The fighting continued for, I can’t remember, a couple of hours at least.”

Three Irish were killed along with six defenders and the tunnel was taken.

On its 60th anniversary all three veterans described the pride they felt having served on Ireland’s first major contribution to world peace.

The mission “saved” the Army and gave it a sense of purpose, says Seaward. “Before that conditions had changed very little since 1922.”

Irish troops would remain in the Congo for four years, starting an unbroken record of Defence Forces participation in peacekeeping operations, the longest of any country in the world.

This record was seen as vital in Ireland securing a seat on the United Nations Security Council last month.

“They could always rely on us,” says Seward. “We’ve ended up the best peacekeepers in the world.”

*This article was amended on July 27th 2020 to correct an error in the use of the word platoon rather than patrol.