Ban on smoky coal extended to 13 towns with populations over 10,000 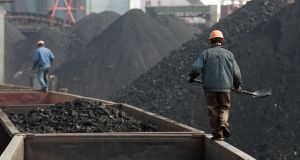 Research indicates that the introduction of the smoky coal ban in Dublin has resulted in approximately 350 fewer deaths a year. File Photographe: Qilai Shen/Bloomberg News

A ban on the burning of smoky coal has been extended to all towns with populations of over 10,000 and will come into effect from September 1st.

Minister for Environment Eamon Ryan has signed the regulations to include 13 more towns to the list of urban areas including Dublin and 25 large towns where the burning, sale and marketing of smoky coal is currently banned.

Research indicates that the introduction of the ban in Dublin has resulted in approximately 350 fewer deaths a year. A European Environment Agency report last year indicated that in 2016 there were 1,180 premature deaths arising from air pollution in Ireland.

Last December the government was defeated when the Dáil passed a private members’ motion calling for a national ban on smoky coal. Fianna Fáil and the Green Party supported a full ban.

But then taoiseach Leo Varadkar said the State could not introduce the ban because of the threat of legal action by coal distributors who claim turf and wood are more damaging to the environment.

Mr Ryan said he was very pleased to sign the regulations which are enforced by local authorities. He said it would reduce air pollution, promote public health and save lives.

“Fine particulate matter, the pollutant of most concern from domestic solid fuel burning is linked to a range of diseases, he said, including stroke, heart disease, lung cancer, and both chronic and acute respiratory diseases, including asthma.

The programme for government committed to extending the ban to the new towns and to “move towards a full nationwide ban”.