Army officers insured on the double to avoid health levies 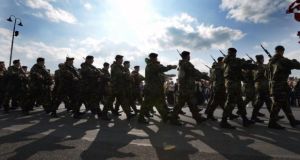 Changes to health insurance rules introduced last week put pressure on more than 1,000 officers serving in the Defence Forces to take out private health insurance even though they already have full medical cover as part of their terms of employment.

Changes to health insurance rules introduced last week put pressure on more than 1,000 officers serving in the Defence Forces to take out private health insurance even though they already have full medical cover as part of their terms of employment.

Under the new Lifetime Community Rating (LCR) regime, which started last Friday, anyone aged over 34 without private health insurance has to pay higher prices. For each year someone goes over that cut off point, they have to add 2 per cent to the cost of their annual premium.

As the LCR deadline approached, the Representative Association of Commissioned Officers (RACO) told almost 1,200 officers they would have to take out private health insurance or they would be hit with the 2 per cent per year levy if and when they leave the force.

While commissioned officers do not have private health insurance, the Department of Defence has made a commitment to pay the full cost of medical treatment as they arise so they are effectively covered.

The issue of double health cover for military personnel was raised at a meeting of officials of the Departments of Defence and Health last week. The Department of Defence sought the meeting to see if any “possible flexibility” existed to allow commissioned officers avoid having to taken out private health insurance policies as well as the cover offered by the Defence Forces.

In a statement, the Department of Health confirmed that military personnel wishing to avoid age related penalties would have no option but to take out health insurance. However, a spokesman added that “provision was made in the regulations for a review to be carried out by the Health Insurance Authority after April 2017. This review will provide an appropriate opportunity to address any issues that may arise from the operation of the scheme as currently provided in the regulations.”

As the LCR deadline approached, all four health insurance companies reported a huge surge in sales with the numbers signing up last week climbing by as much as 1000 per cent on the same week in 2014.

It is likely that in excess of 100,000 people took out a new health insurance policy last week alone.