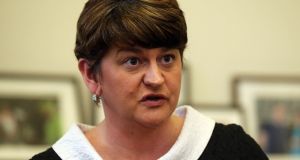 First Minister Arlene Foster is under pressure over a a renewable heating incentive scheme that could result in a £400 million overspend over the next 20 years. Photograph: Niall Carson/PA Wire.

First Minister Arlene Foster is to face up to claims in the Northern Assembly chamber that she was “asleep at the wheel” over a renewable heating incentive scheme that could result in a £400 million overspend over the next 20 years.

Ms Foster and Deputy First Minister Martin McGuinness, in a statement on Wednesday evening, said they had asked for the Assembly to be recalled from its Christmas recess to discuss the controversy.

The Assembly will meet on Monday morning when Ms Foster will make a “full statement” on “matters of public concern” surrounding the scheme.

Ms Foster and Mr McGuinness said Northern Executive Ministers discussed the issue on Wednesday evening and “underlined the seriousness of the issues involved and the importance of restoring public confidence”.

“It was also emphasised that detailed plans are being finalised to significantly reduce the projected losses in the years ahead,” they added.

The scheme was designed to encourage users to switch from fossil fuels to biomass heating systems such as wood-burning boilers. Failure to put a cap on the amount of usage and overgenerous subsidies means that the scheme could involve excess payments of more than £400 million by 2036.

DUP deputy leader Nigel Dodds strongly defended Ms Foster who was accused of being “asleep at the wheel” on the matter. He referred to a redacted letter that the DUP produced on Wednesday.

This, it said, was the letter written to Ms Foster in 2013 by a so-called “whistleblower” when she was minister for enterprise and responsible for the scheme.

In the letter the writer did not refer to any flaws in the scheme. Mr Dodds said it was only at a subsequent meeting with Ms Foster’s officials that the whistleblower raised her concerns.

“A meeting with officials was facilitated and it was in these subsequent discussions that issues about [THE SCHEME]were conveyed. Mrs Foster did not attend these meetings or hear of the concerns. The initial email was the only contact with the Minister,” said Mr Dodds.

“There has been a quite scurrilous attempt to blame Arlene Foster for the RHI saga. The endlessly repeated claim has been that she failed to follow up on the whistleblower concerns. Now we know that no such concerns were raised with her.

“This is no criticism of the lady in question. She has behaved with great integrity throughout and even told the media that her initial email to the Minister did not go into detail,” added Mr Dodds.

Meanwhile, the SDLP leader Colum Eastwood said he will try to table a motion of no confidence to “exclude Arlene Foster as First Minister while she continues to face critical questions about her involvement in the biggest public finance scandal in the history of devolution”.

The SLDP will need 30 Assembly members to sign up to such a motion. Indications from the Ulster Unionist Party and Alliance members were that they would support a no confidence motion. It was not clear whether the signatories would be gathered in time to have the motion debated at Monday’s special Assembly meeting.

Mr Eastwood called on Sinn Féin to support his motion. “They have a choice. They can stand with us and with the public who are demanding the highest standard of accountability or they can continue to stand in the shadow of the DUP, propping up a First Minister who treats accountability with disdain.”

Each time he refused to answer the question. He insisted he would not “engage in any politicking” on the issue.