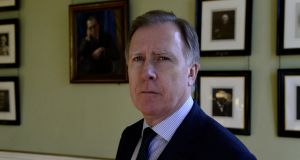 David Browne, president of the Royal Institute of the Architects of Ireland, said co-living bedrooms of less than 25-30sq m would be “in my opinion, too small”. Photograph: Cyril Byrne

The president of the Royal Institute of the Architects of Ireland has said he has concerns about the size of some co-living schemes currently envisaged for development in Dublin.

While he expressed support in general for the concept of co-living, David Browne said: “We must be very careful to provide bedrooms of an adequate size for someone to live in for an adequate period.”

He said anything under 25-30sq m would be “in my opinion, too small”. Bedrooms in co-living schemes which have been submitted to planners, for example some proposed by builder Bartra Capital Property, have bedrooms as small as 16.25sq m.

Mr Browne, who is a practising architect and a director of leading Irish firm RKD, also urged that community units of 10-20 people should be encouraged within each development to reduce the risk of overcrowding of communal facilities. “If you have 40 units on one floor, you should have two or three different sets of facilities,” he said.

“The community area, the living, cooking, hanging out area, it needs to be a decent size that people need to feel they’re in a comfortable area to share with other people. If they are too small they will become unused places that people don’t want to be in.”

He also argued that the layout of the rooms should revolve around a central community area, “and not along big long corridors”.

While Mr Browne would not specify any particular development or builder for criticism, designs for some Bartra schemes display some of the features listed above, including communal kitchens shared by up to 42 residents.

It is anticipated that such rental units, which critics have described as “Dickensian” and “21st-century bedsits”, will rent for about €1,300 a month. Minister for Housing Eoghan Murphy was criticised last month for describing co-living as an “exciting” choice for young workers. He has said that the proposals for co-living have been “welcomed by many”, including architects.

Indeed, Mr Browne told The Irish Times that co-living could play an important role in the housing market. “We need to meet the housing needs across a broad spectrum, from student, to elderly, to families,” he said, adding that co-living is “suitable for people at a particular stage in their lives”.

“There are positives about it, and by having this form it releases other forms like apartments to other people in the market,” he said. He added that the inclusion of community facilities, such as gyms or cinemas, made such schemes attractive. “It’s not like a bedsit where you’re living a life of quiet desperation on your own.”

In a statement, Bartra Capital said  the co-living units are not designed for “the general population, couples or families”. The company said co-living “will help with the broader supply crisis because it will take renters who choose these co-living buildings out of the market”, and that it was not a replacement for “normal residential developments”.