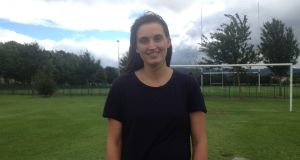 English-born Irish resident Michelle Heming: “I don’t think I would have looked for Irish citizenship before Brexit, but now I really would prefer no issues when I am travelling.”

When Michelle Heming thinks about being separated from her family in airports, the thoughts of having an Irish passport become a lot more alluring.

The self-described “proud Englishwoman” lives in south Dublin and carries a UK passport, but, with the recent Brexit vote having consequences for EU ease-of-travel, she has joined the growing number of those considering their options. It is time, she says, to think about Irish citizenship.

“My only connection before I met my [Irish] husband was that I had been to Ireland on my holidays twice,” she says.

“If it wasn’t for Brexit I wouldn’t give up my British passport as I do see myself as British. I am not Irish even though I have an Irish accent, my children are Irish and I love living here.

“[It’s] because of the worries I have in terms of when we travel together, are we going to have to go into different lines now? Am I going to be separated from husband and children in airports and ports?

“I don’t think I would have looked for Irish citizenship before Brexit but now I really would prefer no issues when I am travelling. Or what if we had to relocate due to a new job to another part of the EU? Being an Irish citizen would eliminate any hassle in employment too.”

Applications for Irish passports and citizenship have soared since the EU referendum in June.

The Irish Embassy in London, which deals with passport applications from the UK excluding Northern Ireland, received 6,710 requests in August alone, more than twice the figure recorded in the same period in 2015.

Application numbers also rose sharply in Northern Ireland, with an 80 per cent increase in August compared to the previous year. In September the numbers grew year-on-year from 2,549 to 4,126.

The swelling volume of applications is such that the Irish passport office has extended the contracts of over 100 temporary staff for three months.

In another part of south county Dublin, close to the residence of the British ambassador, Jean Gargan Smith and her English husband Dave are getting his citizenship application ready.

The couple have also decided Dave should relinquish being a British subject to become an Irish citizen after Brexit.

Dave, who works as a manager for a biopharmaceutical company, spends a lot of time travelling, including one week per month in the United States at his employer’s headquarters.

“After our second child was born, Jean and I did discuss me applying for Irish citizenship, but after the Brexit vote I became convinced I need to do so now. It highlighted the issue again,” he says.

“We were on holiday when the Brexit result was announced and we were shocked at the outcome. I still find it hard to believe to this day that the UK is heading out of the EU.”

Dave, who comes from Derbyshire, says he worries Brexit will make it more complicated for those like him still having to travel on a UK passport.

“With an Irish passport I can travel freely on business anywhere around Europe. I am one of the unlucky ones as my ancestors emigrated in the 19th century to Australia and eventually returned to Britain,” he says.

“They were originally from Ireland but their roots are too far back for me to claim automatic citizenship. So there is only one route I have to take and that is to apply to become an Irish citizen.”

On the day the Guardian arrived at the Gargan-Smiths’ home, Jean had just come off the phone from the Department of Foreign Affairs inquiring about how long it could take her husband to acquire citizenship.

“The woman in the department advised me it could take at least up to 12 months before Dave could obtain citizenship,” she says.

“And she said the largest cohort of people making inquiries to them about Irish citizenship were British nationals living in Ireland.”

The couple say they are “bitter and angry” over the vote to leave the EU, which Dave adds was “due to lies over immigration mainly”.

The number of those on the Irish Foreign Birth Register – for individuals born outside the country who are eligible for Irish citizenship – also increased dramatically following the June referendum.

A memo sent to the Irish secretary general on July 6th showed that 113 registrations were received by the London embassy in the week following the Brexit vote. This compares to an average of 13 per week in 2015.

“If this rate . . . is sustained, it would mean almost 6,000 applications at Embassy London over a one-year period, which is the number currently processed in a full year worldwide,” the memo notes.

Aside from the backlog in applications following Brexit, the other barrier to Irish citizenship for Ireland’s Brits is the cost. At €975 Ireland, alongside Austria, is the most expensive place in the EU to apply to become a citizen of the state.

Fine Gael Senator Neale Richmond, who knows the Gargan-Smith family, is campaigning to halve the fee.

“We have to make it easier for people to become Irish citizens and that has to start with the cost,” he says.

“It is in our economic interest to encourage people like Dave and others in the same situation to become full citizens of this State.

“The EU average in terms of cost is between €400 to €500, which is the figure ours should be brought down to. The current fee is exorbitant and we should be doing everything we can to encourage taxpaying, wealth-generating, talented people living in Ireland from countries like Britain to become fully fledged Irish citizens.”

Due to the pre-EU common travel area, there is unique freedom of movement for both Irish and British people between the two islands. The 380,000 Irish people in the UK are also not considered to be from a foreign country under British law.