Jodie Ginsberg, who is of Jewish hertiage, to share stage with Myers at UL lecture 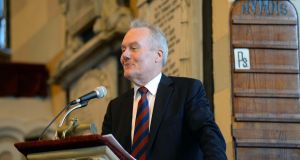 Kevin Myers apologised and said he had ‘no career left’ and that his reputation was ‘in tatters’. Photograph: Eric Luke / The Irish Times

The head of an organisation that campaigns against censorship has said she is happy to have former columnist Kevin Myers - fired recently over offensive comments about women and Jewish people - to moderate a lecture she will deliver in Limerick next month.

Chief executive of Index on Censorship Jodie Ginsberg, who is of Jewish heritage, will deliver one of six lectures in the autumn series presented by the Limerick Civic Trust in conjunction with the Kemmy Business School at the University of Limerick.

She is the only woman among the six speakers in the series.

A female professor emeritus at UL has described the decision to invite Myers to moderate Ginsberg’s lecture as a “provocative, calculated” move by the organisers to get an audience.

Ginsberg told The Irish Times she was aware Myers had been asked to moderate.

In an email, she said she was “happy for him to do so”.

“I wouldn’t be much of a free speech advocate if I refused to debate with someone whose views I disagree with,” she said.

“I am a feminist of Jewish heritage: I find much of what Myers has written deeply offensive. Rather than giving him the opportunity to repeat these views, I see the Limerick talk as an opportunity to air mine.”

Ginsberg said that, as someone who had moderated many events, she was curious that anyone should think that acting as a moderator gave someone a ‘platform’ for airing their views.

“If Myers is any kind of decent moderator, his job will be to give a platform to my view not his,” she said.

She also said it was “obviously ludicrous” that in 2017 Limerick Civic Trust only had one female speaker in the line-up.

“Hopefully the fact that national media is now drawing attention to this will mean it’s not ever repeated,” she said.

The Sunday Times published an apology following the publication of Myers’s column on July 30th, in which he made offensive comments about Jewish people and women, suggesting that presenters Vanessa Feltz and Claudia Winkleman were well paid by the BBC because they were Jewish.

The newspaper also fired him as a columnist and he subsequently apologised and said he had “no career left” and that his reputation was “in tatters”.

David O’Brien, chief executive of Limerick Civic Trust, told the Limerick Leader this week he had not read Myers’s widely criticised article, entitled ‘Sorry, ladies – equal pay has to be earned’. He said the lectures were about “encouraging debate and having opposing views”.

Pat O’Connor, Prof Emeritus at University of Limerick, whose work has a focus on gender issues, told the newspaper she hoped the talk “isn’t a call to legitimise the views of other unreconstructed misogynists”.

“It’s not an acceptable position to say everyone is entitled to free speech if it stirs up hatred against any one group. It’s not an uncontested right,” Prof O’Connor said.

“I have no time for political correctness. I think if the heart is right, the lip can be forgiven. But it seems to be giving a platform to Kevin Myers, and legitimising opinions that many people found offensive.”

Index on Censorship is a non-profit organisation that campaigns for and defends free expression worldwide. It publishes a magazine with work by censored writers and artists.