Annual charge for ‘free travel’ pass proposed by State in 2014 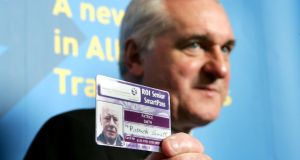 A €50 annual charge for the “free travel” pass available to pensioners, carers and the disabled was proposed in an internal Government report as a way of securing the long-term viability of the scheme.

The report found that a fourth of the population is entitled to some level of free travel, and said more people would avail of it in the years ahead because of an ageing population.

It concluded the scheme was “not sustainable” unless it was either allocated more money, restricted in its scope, or subjected to an annual charge.

The scheme was introduced 50 years ago by Charles Haughey when he was minister for finance.

The report on its future, which was completed in 2014, set out options to secure it in the medium to long term, depending on the level of funding allocated by the Government. No extra money was provided in last October’s budget.

The report estimated that one of the options, a €50 annual charge, could recoup €37 million and cut down on the number of free travel passes because people would have to apply for it proactively each year.

Reduced rather than free fares

Other options included moving towards reduced fares rather than free fares; abolishing free travel for everyone except pensioners; abolishing passes for spouses; reviewing the medical requirements for companion passes, which are provided to people who cannot travel alone; reviewing the scheme for the disabled; introducing a means test for certain people; and delaying the rollout of the pass for a year for pensioners.

While the report was completed in 2014, its authors say its purpose was not to identify cuts but to examine the “current operation and future development of the Free Travel Scheme”.

The report was released to The Irish Times by the Department of Social Protection.

Minister for Social Protection Leo Varadkar, however, said he remains fully committed to the full retention of the scheme.

“For many it’s a lifeline and I will defend it to the hilt,” he said

Mr Varadkar previously told the Dáil the report was not published because it would have caused “anxiety among vulnerable users of the service”.