Elections to the Stormont Assembly are to be held on March 2nd following the collapse of the powersharing executive. Video: Reuters 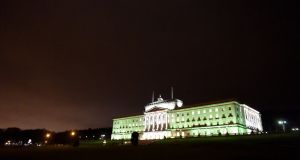 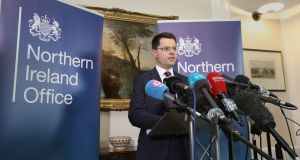 The British and Irish governments have appealed to all political parties to fight a calm and respectful election campaign in Northern Ireland after Assembly elections were fixed for Thursday, March 2nd.

Dublin and London are concerned that during the lengthy campaign of more than six weeks, relations between the DUP and Sinn Féin could deteriorate to such an extent it could be difficult to restore the Northern Executive afterwards.

The Northern Ireland parties had until 5pm on Monday to find a compromise that would have averted elections.

However, Sinn Féin maintained its refusal to nominate a replacement for Martin McGuinness, who resigned last week as Deputy First Minister in protest at First Minister Arlene Foster’s refusal to stand aside temporarily while an inquiry took place into the “cash for ash” controversy.

Sinn Féin’s decision made the Northern Ireland Executive unworkable and left Northern Secretary James Brokenshire with no option but to call elections.

The Executive is no longer functioning and the Assembly, which was elected only last May, will be dissolved on Thursday week, January 26th. Ministers in the Executive will continue to run their departments.

The outgoing Assembly has 108 members, but the new one is being reduced to 90 seats in 18 constituencies, each with five members. 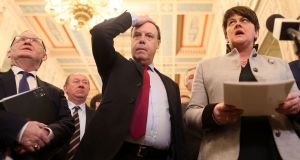 Minister for Foreign Affairs Charlie Flanagan spoke to Mr Brokenshire before the Northern Secretary announced the elections. “I reiterate my call to all parties in the election to act responsibly in word and deed so that the political institutions of the Good Friday Agreement will not be damaged in the longer term,” Mr Flanagan said.

Mr Brokenshire called for a “calm” election campaign to provide the “space” where a Northern Executive and Assembly could be restored.

If restoration does not happen within a three-week period after the election, Mr Brokenshire is obliged to call another election, although he could bring in emergency legislation to suspend Stormont.

“I am not contemplating anything other than devolved government,” he said.

It became clear shortly after noon on Monday that elections would be called after the Sinn Féin Minister for Health, Michelle O’Neill, with Mr McGuinness sitting beside her in the Assembly chamber, said she would not nominate anyone to replace him as Deputy First Minister.

Ms Foster later accused Sinn Féin of pursuing “political self-interest” in not nominating a Deputy First Minister. “They have forced an election that risks Northern Ireland’s future and its stability, and suits nobody apart from themselves.”

Meanwhile, the DUP has rejected as “outrageous, untrue and unfounded” an allegation made under privilege in the Assembly by former DUP minister Jonathan Bell that Timothy Johnston, special adviser to Ms Foster, and John Robinson, special adviser to Minister for the Economy Simon Hamilton, had prevented subsidies being reduced in the Renewable Heat Incentive (RHI) scheme - the so-called “cash for ash” scheme - because they had such “extensive interests in the poultry industry”.

A DUP spokesman said: “Timothy Johnston has no interests whatsoever in the poultry industry and does not benefit or have any family members who applied to or benefit from RHI.

“John Robinson has no personal interest in the poultry industry. His family home farm have chicken houses but are not part of the RHI scheme and never have been recipients or applicants,” he added.

The DUP challenged Mr Bell to make his allegations outside the privilege of the Assembly.