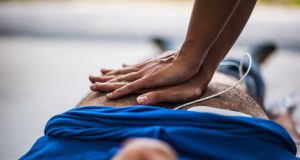 The sample group involved in excess of 12,400 people who had experienced their first heart attack. Photograph: Getty Images

Anger and emotional upset are heart attack triggers which more than double the risk of symptoms within one hour, according to fresh research led by a Galway academic.

The risk is increased further when angry or emotionally upset while also engaged in heavy physical exertion, notes the research which has been published in the American Heart Association’s journal Circulation.

The international study, led by NUI Galway researcher Dr Andrew Smyth, is said to provide further “crucial” evidence about the health link between mind and body.

The analysis of data across 52 countries involved some 12,461 people who had experienced their first heart attack.

Researchers found an association, described as more than twice the risk, between anger or emotional upset and the onset of heart attack symptoms within one hour.

The research revealed that the same was true for heavy physical exertion during the hour before their first heart attack.

However, patients who recalled being angry or emotionally upset while also engaged in heavy physical exertion tripled their risk of cardiac arrest.

Dr Andrew Smyth of NUIG’s Health Research Board clinical research facility and McMaster University’s Population Health Research Institute in Canada, said it was the first study to represent so many of the world’s regions, including major ethnic groups.

“Previous studies have explored these heart attack triggers; however, they had fewer participants or were completed in one country and data was limited from many parts of the world,” he said.

Participants in the Interheart study completed a questionnaire about whether they experienced any of the triggers in the hour before their heart attack.

They were also asked if they had experienced any of the triggers in the same one hour period on the day before their heart attack.

One study limitation was that participants had to recall triggers, but specific suggestions were not made by the study authors.

The research authors note that the anger, emotion and physical exertion triggers appear to increase a person’s heart attack independently of other risk factors, including age, smoking, obesity, high blood pressure and other health problems.

Extreme emotional and physical situations are believed to have similar effects on the body, in raising blood pressure and heart rate, changing the flow of blood and reducing blood supply to the heart, said Dr Smyth. This becomes even more significant in blood vessels already narrowed by plaque.

One of Dr Smyth’s collaborators, Barry J Jacobs, director of the Crozer-Keystone Family Medicine Residency programme in Springfield, Pennyslvania, said that the study was further evidence of the crucial link between mind and body, and demonstrated the benefits of “mental wellness”.

He said that people at risk of a heart attack would “do best to avoid extreme emotional situations” and seek peer support.

“Regular physical activity has many health benefits, including the prevention of heart disease, so we want that to continue,” said Dr Smyth. “However, we would recommend that a person who is angry or upset who wants to exercise to relieve some of this stress should not go well beyond their normal routine to extremes of activity.”