An Post sets deadline for retailers due to record Christmas demand 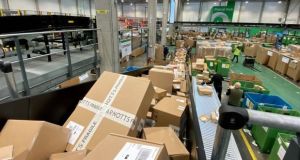 An Post had duty to ensure that its large e-commerce retailers ‘are fully aware of the impact of Christmas volumes’. Photograph: Bryan O’Bryan

An Post has warned that the unprecedented volume of parcels it is handling due to the surge in online shopping means it cannot guarantee large Irish and multinational retailers pre-Christmas delivery unless it has parcels by December 14th.

A spokeswoman said that while parcels it receives from larger companies “will probably be delivered in time” she stressed that “probably is not good enough if something has to be there for Christmas morning”.

She added that a record volume of online shopping had prompted An Post to issue the alert that it would only be able to “guarantee pre-Christmas delivery of e-commerce parcels received into its processing system by close of business on December 14th”.

“This deadline applies only to An Post’s large-scale ecommerce retailers and shippers. It does not affect personal customers posting parcels and packages,” she said.

“Ireland has never seen volumes like this. We’re running a full capacity in recent weeks, delivering 3.3 million parcels, up from 1 million at the same time last year,” she continued.

She said An Post had a duty to ensure that its large e-commerce retailers “are fully aware of the impact of Christmas volumes on processing and delivery times during this Covid pandemic, so as to avoid disappointment for shippers and shoppers alike. We prefer to be upfront so that these major online sellers can plan their operations and advise their customers accordingly.”

She stressed that everything that has been ordered already would be delivered and she said customers had definitely heeded the advice to get organised for Christmas early this year, with huge increases in parcel volumes since the announcement of the Level 5 restrictions in mid-October.

The latest date for posting cards and parcels within the Republic is December 21st.