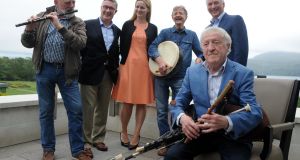 Kieran McLoughlin, second from left, at the annual conference of the Worldwide Ireland Funds in 2015. Photograph: Don MacMonagle

New documents lodged by the philanthropic organisation with the US tax authorities show Mr McLoughlin’s basic salary was $445,783 in 2015.

The Dublin man was paid an annual bonus of $154,583, almost double that of the previous year.

The fund is part of the Worldwide Ireland Funds that were founded in 1976 by Sir Anthony O’Reilly and former US ambassador to Ireland Dan Rooney.

They have raised more than $500 million for causes both in Ireland and around the world.

The fund also provided $1.15 million in funding to the Music Generation project which U2 also supports.

The returns show that Dublin universities UCD and Trinity College were the big winners in the grants provided – UCD received funds of more than $6.1 million and TCD received $4.63 million.