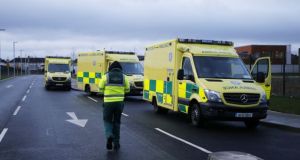 Up to 500 ambulance service personnel are to go on strike for three more days in the weeks ahead as part of a dispute over trade union representation rights and the deduction of union subscriptions at source from their pay.

The staff concerned, who are members of the National Ambulance Service Representative Association (Nasra), are to stage work stoppages on Friday, February 15th; Thursday, February 28th; and Friday, March 1st.

The action will run from 7am to 5 pm each day.

Members of Nasra already staged a 10-hour work stoppage at the end of January.

Nasra is a branch of the Psychiatric Nurses Association (PNA) whose general secretary Peter Hughes said the newly-announced strike days represented a considerable escalation of the industrial action taken to date by ambulance personnel.

He said it demonstrated their resolve “to be represented by the union of their choice, and not by a trade union that the HSE wants to force them to join”.

He said: “Against the background of the myriad of serious problems in our health services, it is beyond belief that the HSE, supported by the complete indifference shown by the Minister for Health Simon Harris, in continuing to confront over 500 PNA ambulance personnel members on this issue of fundamental worker rights.

“Despite the effort of the HSE, PNA ambulance branch has shown that it enjoys widespread and growing support from the public, and ambulance personnel throughout the country on the issue at the core of this dispute.”

Nasra’s national chairwoman Sinead McGrath said she again called on the Minister “to avoid this further escalation in this dispute and instruct the HSE to engage with the industrial relations machinery to end this dispute and allow ambulance personnel the right to be members and represented by the trade union of their choice”.

HSE managers who were qualified paramedics were also moved into frontline services.

The HSE said last mont that the National Ambulance Service recognised the trade unions Siptu, Unite and Fórsa as representatives for its staff.

It said that in particular, Siptu was the recognised trade union for frontline personnel.

“Recognition of other associations or unions would undermine the positive engagement that exists and would impair good industrial relations in the National Ambulance Service.”