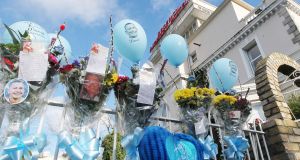 Family members of David Byrne have paid tribute to him a year after his murder, placing flowers and notes for him outside the scene at the Regency Hotel in Drumcondra, Dublin.

Byrne was shot dead in when gunmen opened fire at a boxing weigh-in inside the Regency Hotel on February 5th last year.

The blue balloons bore his photograph and the words “we miss you so much David”. One letter addressed to “my beautiful baby brother” read: “This time last year you were brutally murdered in a place you should have been safe. Our whole life has changed. The life and soul of our family you lit up a room the minute you walked into it. Your smile says it all, every photo we have you’re smiling.”

Meanwhile, members of the Garda’s Armed Response Unit were in position just outside the gates of the Church of St Nicholas of Myra on Dublin’s Francis Street as the bells tolled announcing the start of the regular Sunday mass at 11.30am.

A small gathering of reporters and photographers were also in evidence both inside and outside the church amid speculation that a memorial service was to take place for Byrne .

His funeral took place in the Francis Street church more than a week after his death. Byrne’s death sparked a spate of murders as the feud the Hutch/Kinihan feud escalated.

While he was not mentioned in the Mass leaflet or in the prayers of remembrance read out during the Mass itself, there was still a degree of evident tension before and afterwards.

However some of those at the Mass blamed the media for stoking up what they described as misplaced fears that the church and its environs would be somehow central to a reprise of the violence of a year ago.

While there were no references made to Byrne during the mass, the parish priest Fr Martin Dolan did use his sermon to remind parishioners of the need to forgive those who had done them wrong and to respect people even if they had given cause for resentment.

“Love your enemies, and do good to those who hate you,” he said.

Outside the Regency Hotel another letter read: “ David my beautiful brother. I can’t believe it’s a years since I last spoke to you. You left our house that day so full of life only to be innocently murdered.

Another read “Oh my beautiful baby bro. You will never be gone and never forgotten. Life will never be the same again without you. Miss and think about you every minute. It will never get easier. I know cause if there had of been proper protection there or police you wouldn’t have been innocently murdered.”

Dublin Bus warns economy will not return to normal if two-metre rule continues 21:37
Maternity leave exclusion from wage scheme could breach EU law, rights body says 21:31
Coronavirus: Further nine deaths reported along with 46 new cases 21:30
Today was hottest day of year so far with 26.8 degrees recorded in Roscommon 21:14
2,000 students yet to apply for calculated Leaving Cert ahead of deadline 20:30