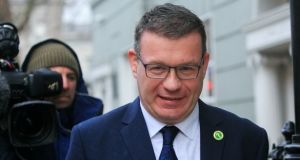 The Labour Party does not expect to enter a new government coalition, its new leader Alan Kelly has said.

Mr Kelly said although his party will “talk to anybody”, he does not believe they will be in a position to go into a coalition.

“We will talk to anybody who wants to talk to us, it is the appropriate thing to do at this time,” he told RTÉ radio’s Morning Ireland.

“But I don’t believe we will be in a position to go into coalition.

“There are four large parties, any three of which could form a government. It is up to them to do so.”

Mr Kelly said he was disappointed that the Green Party “with their large mandate” were “not willing to put their shoulder to the wheel.”

When asked if the Labour party would participate in a confidence and supply agreement with a new government, Mr Kelly said that a document was due to be sent to all political parties this week and his party would consider it in detail and would respond.

Mr Kelly said he was looking forward to putting forward the Labour party’s vision. “To show that we are different to all the other parties.”

He said he believed there was a need for a strong majority government, “that’s what the four (other political parties) should be doing.”

1 Miriam Lord: Taoiseach is trapped in a Zoom session from hell
2 Covid-19: Two-week quarantine period for arrivals into State could be lifted for some
3 Irish planning for no-deal Brexit to restart as EU-UK talks go badly
4 Emily Maitlis thanks BBC viewers for support after Cummings row
5 Brazilian gang held in Offaly had sub-machine gun and student visas
Real news has value SUBSCRIBE