Wednesday forecast to be mild, bright and dry over most of Ireland 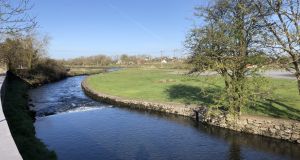 Clarinbridge, Co Galway, on Tuesday morning. Sunny weather is forecast for the rest of the week. Photograph: The Irish Times

Warmer weather is on the way, with temperatures forecasted to reach highs of up to 18 degrees this week.

Met Éireann said it would be cold on Tuesday morning with frost in places and some patches of mist.

Wednesday will also be mild, bright and dry over most of Ireland with sunny spells, but there will be some patchy light rain in northwestern coastal areas.

Thursday will continue to be mild or quite warm and will be dry with sunny spells.

The weather will be warmest in Leinster and Ulster, while clouds will develop over Munster and Connacht later in the day.

Highest temperatures of 14 to 18 degrees with light to moderate east to southeast breezes, making it coolest on east and south coasts, and warmest in the midlands.

Early on Thursday night, showery rain will develop in the southwest and will spread northwards to most areas overnight.

Friday will be mostly cloudy and wet with rain or showers, which could possibly be heavy at times.

On Friday night, showery rain will gradually clear from the southern half of the country, but will linger over much of Ulster.

Saturday will start off mostly cloudy with further rain in northern areas. This will clear and scattered showers will affect many areas throughout the day, with a few bright intervals at times.

It will be a bit cooler with highest temperatures of 12 to 15 degrees and light to moderate westerly breezes.

Sunday will continue to be mild over the southern half of the country with some showers. It will be drier and cooler further north.

Highest temperatures of 11 to 14 degrees over the northern half of the country and between 14 and 17 degrees further south.

He said that despite the bank holiday weekend, it was important that people avoid unnecessary travel in order to limit the spread of coronavirus.

Dr Holohan also said people with second homes should not travel to them for the bank holiday weekend and that the public should not to engage in unnecessary leisure activities.

Meanwhile, Met Éireann has confirmed it intends to display Northern Ireland on its weather warnings.

There have been technical difficulties incorporating the forecasts for both the North and Republic of Ireland but the national forecaster said these issues are now being resolved.