Agreement can be reached over €20m Kerry greenway, says Griffin 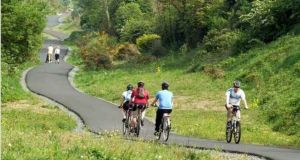 Minister of State for Tourism and Kerry TD Brendan Griffin has expressed confidence that a resolution will be found with landowners which will allow the €20 million South Kerry Greenway to proceed and open within three years.

Mr Griffin said that he believed talks between Kerry County Council and 197 landowners will lead to a resolution, at least in the majority of cases, which will allow the 32km greenway from Glenbeigh to Reenard to proceed along the route of the old Cahersiveen railway.

Kerry County Council last week applied for planning permission for the project and is seeking compulsory purchase orders (CPO) for some 222 privately owned holdings owned by 197 landowners. Mr Griffin was confident that a resolution can be found through intensive talks.

“Not everybody is against it or is adversely affected by it, but you have a cohort of people who are not happy with the process so far so. It’s gone to CPO – I don’t think all the diplomacy in the world is going to bring everyone on board but I hope the vast majority of people will be accommodated,” he said.

Speaking at the Daniel O’Connell Summer School in Cahersiveen, Mr Griffin said the current generation owes it to those who built the Cahersiveen Railway in the 1890s to ensure that the extraordinary engineering work carried out then is put to good use for generations to come.

“We owe to our ancestors who built these fantastic railways to make the most of them - it is shame that they are sitting idle and have been allowed to crumble and the line has gone back into private ownership in many cases - there is an obligation to protect our heritage and make the most of it,” he said.

Mr Griffin said that the creation of a 3 metre-wide greenway from Glenbeigh through Mountain Stage, Kells and Cahersiveen down to the sea at Reenard would involve considerable investment but it would lead to a huge return to the local economy.

Linking tunnels on Drung Hill, restoring and making safe the viaduct at Gleesk and restoring the Cahersiveen Railway Bridge were all major undertakings but the greenway would prove a huge attraction for visitors, he said.

Mr Griffin instanced the success of both the Great Western Greenway in Mayo and the Waterford Greenway, both of which he had cycled and both of which were transforming the local economies around Westport and Achill and Kilmacthomas and Dungarvan.

He said that he was similarly confident that the South Kerry Greenway would have the same sort of rejuvenating effect through the establishment of cafes, delicatessens, bike hire and taxi hire businesses along the scenic rail route which was closed by CIE in 1960.

Mr Griffin said that the Department of Transport, Tourism and Sport had fund for greenways which it will be rolling out over the next number of months and he expected that Kerry would be well placed to access some of that funding for both the South Kerry Greenways and other greenway projects.

Mr Griffin said he believed the investment of at least €20 million would be met from central funds from the Department of Transport, Tourism and Sport and Kerry County Council for sections like Mountain Stage while funding might also be provided by the Department of Rural Affairs for other sections.

1 ‘It has to stop’: Republican Georgia election official lashes out at Trump