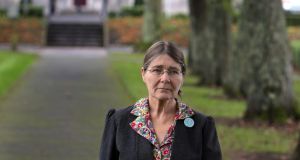 Dr Micheline Sheehy-Skeffington, who successfully took a case against her employer NUIG on the grounds of gender discrimination. A meeting on gender and equality issues in higher education has heard how such cases are still rare. File photograph: Joe O’Shaughnessy

Joan Donegan, deputy general secretary of the Irish Federation of University Teachers, said: “The number of cases where we are contacted by a female academic over some issue about career progression or gender discrimination remains very, very low,” said Ms Donegan.

“The reasons are varied - women in academia in particular feel isolated and a lot of young female academics are on fixed term contracts and they don’t want to jeopardise their position.

“Another factor is that there is a sense of collegiality within their department and they may have a sense that by taking a case they are letting the department down,” Ms Donegan said.

In some cases, female academics simply lack the confidence to bring a case forward over gender discrimination, which remains a hidden problem in Irish academia, Ms Donegan added.

Dr Sheehy-Skeffington, who also spoke at the UCC meeting, had shown great courage in bringing her case for discrimination and had helped highlight the issue, Ms Donegan said.

Ms Donegan said that CSO statistics on discrimination found that just 10 per cent of those who experienced it made an official complaint or took legal action. Gender discrimination was found to produce fewer complaints than discrimination due to race or ethnicity in a CSO survey carried out in 2010.

Ms Donegan told the meeting that just 16 per cent of professors at UCC are female, compared to a national average of 19 per cent, and that this needs to be addressed.

‘Unacceptable’ that Cahersiveen direct provision staff not Garda vetted 20:31
Coronavirus: Need to move away from the ‘language of blame’ - Holohan says 20:22
Just a quarter of suspected Covid-19 breaches have been charged 20:02
University of Limerick head resigns over personal Covid-19 health concerns 19:40
Dig for remains of Red Hugh O’Donnell finds skull and coffins 19:18