Abortion: MPs asked not to impose their will on Northern Ireland 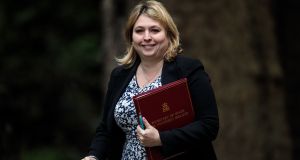 Northern Ireland secretary Karen Bradley has told MPs at Westminster that they should not impose their will on Northern Ireland by legislating for abortion there but promised Conservatives a free vote on any move to do so. Photograph: Jack Taylor/Getty Images.

Karen Bradley has told MPs at Westminster that they should not impose their will on Northern Ireland by legislating for abortion there but promised Conservatives a free vote on any move to do so.

The Northern Ireland secretary was speaking during a three-hour debate on a proposal to repeal two sections of the 1861 Offences against the Person Act (OAPA) which criminalise abortion.

“Abortion has been a devolved matter in Northern Ireland since it was created in 1921, and it would not be appropriate for Westminster to seek to impose its will, or to be the arbiter of an issue that has long been devolved to the people of Northern Ireland,” she said.

“The government believe that the question of any future reform in Northern Ireland must be debated and decided by the people of Northern Ireland and their locally elected, and therefore accountable, politicians.”

Ms Bradley welcomed the outcome of last month’s referendum on repealing the Eighth Amendment to the Constitution, describing it as a significant moment in Irish history, but she warned against overstating the vote’s relevance to the United Kingdom.

“In the Republic of Ireland, a referendum is required for constitutional change. That is not the situation in the United Kingdom, including in Northern Ireland,” she said.

“We cannot simply read across from the vote. The referendum was decided by the people of Ireland, and the process is now to be taken forward by the Irish Government. It is clearly a matter for the Irish, and it should not be implied that that should automatically extend to the people of Northern Ireland.”

Labour’s Stella Creasy, who had called for the debate, said repealing the two sections of the 1861 act would decriminalise abortion but would not prevent Northern Ireland’s politicians from determining the precise nature of the abortion regime there. The 1967 Abortion Act exempted women in England and Wales from prosecution under the 1861 act but the change did not apply to Northern Ireland.

“I respect and recognise that some people do not consider abortion a human right and so think a criminal approach is the right response, but I recognise many more agree it’s not that which worries them, but the constitutional issues that are at stake,” she said. “Let me reassure those MPs who want to uphold the role of devolved assemblies that repealing OAPA would not write a particular abortion law for anyone, but it would require them to act.”

The debate was often heated and sometimes emotional, as Conservative MP Heidi Allen spoke tearfully of her own decision to have an abortion.

“I was ill when I made the incredibly hard decision to have a termination. I was having seizures every day, I wasn’t even able to control my own body, let alone care for a new life,” she said.

All 10 DUP MPs were in the chamber for the debate and most contributed to it, defending the party’s anti-abortion stance and insisting that the matter should be resolved by Northern Ireland’s politicians.

Sir Jeffrey Donaldson rejected the charge that his party was disconnected from public opinion on the issue in Northern Ireland, citing politicians in Sinn Féin and the SDLP who also oppose abortion.

Ms Creasy has promised to table an amendment to the forthcoming Domestic Violence Bill which would extend abortion rights to Northern Ireland and the government’s promise of a free vote has boosted her chances of success.

On Thursday, the supreme court will rule on a challenge to the abortion ban in Northern Ireland on human rights grounds and if it upholds the challenge, the Conservative government will have no choice but to act.