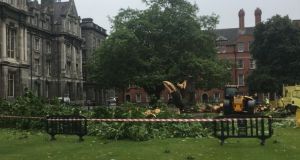 Trinity College is to remove another of its historic trees after the collapse of a famous 170-year-old maple in Library Square in the early hours of last Saturday.

The college’s three Oregon maples were known to be decaying, though the one that fell was not found to be “in immediate danger” when inspected just two months ago.

A second maple – located in New Square – is now to be cut down because the April survey found that it has just one third of solid wood remaining in its trunk.

The collapse of the maple shortly before 3am last Saturday left a scene of “devastation”, said John Parnell, the chair of the college’s Grounds and Gardens committee. No one was injured in the event.

“I was more surprised than most people that this tree collapsed when it did. We regularly get the trees professionally surveyed,” Mr Parnell said.

The last of Trinity’s maples next to the Long Room – the home of the Book of Kells – will, however, survive for now, even though it has “significant decay” in some of its major limbs.

“We intend to follow the expert advice that indicates that recurrent remedial works may potentially allow it to remain standing, at least for a while,” Mr Parnell said.

The maple’s canopy was lightened over the weekend, removing over-dense parts. In addition, gardeners have treated its roots and some of the limbs with a mixture of fungicide and nutrients.

The warm weather is “the probable cause” of Saturday’s collapse, said Parnell, though he added: “We simply do not know, and probably will never know, why [it] collapsed at the time it did.”

Trinity, he said, has been preparing for the time when the maples would be gone by planting an Irish sessile oak and a beech there some years ago. So, while a gap will be felt initially it should be rapidly filled in, he said.